A ringing outing is an opportunity to experience new bells and towers, predominantly in an attempt to better appreciate your own. On the Docklands train outing to Essex, Benfleet made the ringers grateful for having short drafts and bells that behaved themselves without making a great deal of noise each time they are pulled. It was decided afterwards that a bell that has been around for 600 years is allowed to be a bit creaky and occasionally temperamental, and they actually did sound nice.

The real reason for going on trips though is to get to know people better. A lot of the Docklands ringers ring at both Bermondsey and Stepney on a regular basis but the problem with regularity is that it sometimes becomes routine and you need something a bit out of the ordinary to make new discoveries, however disturbing they may be.

I do not think that any of us realised that Tom Pinnock had had a sheltered childhood or that Gill Harris had had an immoral past, but when we found that the tickets between Barking, (a good honest ring of 8 with new ropes, which sounded great when rung properly and let you know when you didn’t) and Basildon were for March 4th and not the 5th, it was Tom that was distraught having never gone through the gate without a ticket before. ‘Really?’ exclaimed Gill. ‘You’ve never jumped a barrier? I used to do it all the time.’ She later defended herself by saying it was during a misspent youth but suspiciously refused to say when that may have been.

Arriving at Basildon before the midday start time allowed people the chance to go up the glass tower and look at the bells, set in a radial frame. This fine set of bells benefits from is unusual setting although we did find the rope circle slightly confusing – being exactly circular it got confusing as to which the tenor was. Whilst being seen by the Basildon public was bound to bring out the exhibitionist in some, I had not been expecting the bells to bring very strong feminist feelings to the fore. With two of the bells being cast by  Joanne Hille c1440 suddenly the men were being kicked off the back end by crusading female tenor grabbers, desperate to ring her bell. 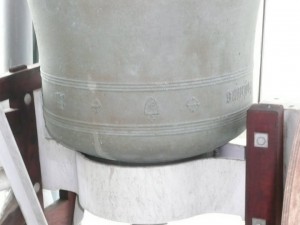 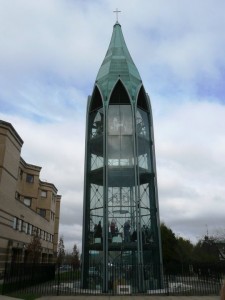 This contrasted greatly with lunchtime discussions. Although Piotr Kufluk showed himself to be both an adventurer and cultured when talking about poetry adorned walls at the Sigirya in Sri Lanka, Greg Rose admitted that he was too busy admiring the females in the frescos on the opposite wall to even notice they were there. I use the term ‘adventurer’ rather than ‘traveller’ as it connotes a certain sense of bravery, something I believe Piotr showed when agreeing about their beauty, whilst in very close proximity to his wife Jinny’s right hook.

Thankfully lunch did pass peacefully and the Hoy and Helmet in Benfleet proved to be very good choice, despite the fact that they did not have the meals ready before we arrived, as we had requested. It was reasonably quick however and £10 for 2 meals seemed a very reasonable price for decent pub fare until walking back to the train and seeing their closest competitors offering 2 meals for £5.99. Several ringers are now thinking about migrating away from London prices.

The best bells of the day were Thorpe Bay, being a lovely sounding, easy going 16cwt eight, set in a large welcoming ringing chamber. It was a shame that we took a typical bell ringers route to get there but I have always said that it is not a proper ringing trip unless you get lost at least once! 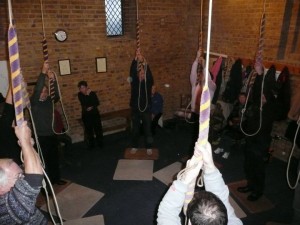 Potentially the most disturbing revelations of the day came at Stanford le Hope, where past dark dealings were alluded to. As darkness fell and the band trooped wearily through the black graveyard and up to the slightly cramped tower thoughts turned to ghostly goings on and communicating with the dead. ‘I think I may have taken part in a séance when I was younger’ revealed Mark Peters. ‘I can’t really remember.’ As it seems to have been short lived and not left a lasting impression it was decided that his soul might be safe but he had better spend a lot of time in churches ringing, just to make sure. We were made very welcome with a lovely cup from the curate. 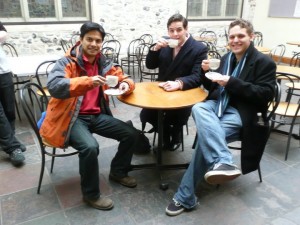 The boys at rest

The day almost ended in disaster when the traditional pub gathering was broken up by hordes of policemen raiding the pub. It was noted that most of the Essex lads and ladettes were nonplussed by the event whilst us soft London folk were frantic with panic that they had heard about the barrier jumping. Fortunately they seemed to be after bigger fish and once the police realised that Gill had left early and was not with us they let us leave peacefully.

Many thanks to Elizabeth LeMoine for a fantastic outing. It was really well organised and people commented that it was lovely to travel around with no one having to be designated driver. We would have preferred a little more sun but I am sure she’ll remember that for next time and it really was a nice day out.

1 thought on “DRC outing to Essex”