Bermondsey entered a band in the Surrey association call change striking competition at Bletchingley for the prestigious Sid Saban Trophy.  In order to be fair to the other contestants, Bermondsey entered not one, but two ringers who have not completed a quarter ringing inside. 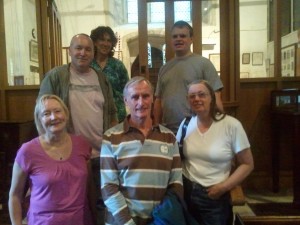 The band rang fourth and, despite a late change to the ringing positions, rang very nicely to a composition from Andrew C. We were awarded a very creditable equal third place but were placed first in the biscuit grabbing competition afterwards. A surprise lesson in ringing fast call changes as part of the awards ceremony being a bit of a bonus to Andrew L who had been dreaming of an early pint before the summons came. He was out-sprinted to the tenor by a wily veteran of Croydon who’s dog then accompanied the ringers efforts. 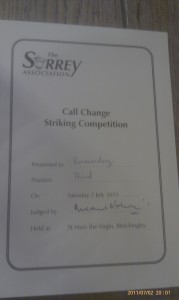 The band then took refuge in a very nice pub where the ringing was analysed for at least 30 seconds before a serious discussion over what food to order took precedence. The team work and sharing previously shown by the band was soon cast aside as Alison revealed her true nature and shamelessly took the last anchovy despite several better claims existing. 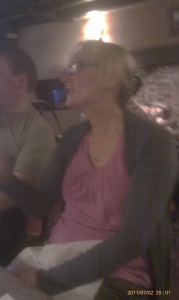 Alison after being confronted about taking the last anchovy

So, a pleasant afternoon ringing in a pleasant part of Surrey. Maybe we’ll do better next year, and maybe we won’t. The band headed back to London to the accompaniment of Ermintrude, Mike’s sat nav avatar.