Picking between competing in a striking contest and watching the first British contestant in the mens’ doubles for seventy years is never an easy choice, but Elizabeth picked a band happy to travel to Colliers Wood for the annual Surrey Striking Competition. Despite a preference for non-competitive ringing, our social instincts won the day. A few of us had already spent the morning on a training session for bob doubles so we decided to truly alienate our partners for the day.

Our record in these events is mixed to put it kindly, but we consider ourselves willing travellers – even to zone three on occasion.

Colliers Wood was a new tower for most of us, and we were initially drawn fifth out of five bands, but swapped with the last band who were waiting for a late-arriving contestant. Listening to the first band, we had a few concerns as the bells definitely sounded a bit ‘light’. When it came to our turn, Elizabeth cunningly called a few changes so that we had a quick try on leading. This was Elizabeth’s first go at conducting in a competition, so we had practiced the routine on the previous Tuesday and Elizabeth had practiced shouting loudly. Both appeared to have paid off as we finished second out of five bands to an excellent Croydon effort. A scratch team of experts and beginners entered at the last minute and actually had the fewest faults, but were not placed as the official winners because of some reason that I can’t remember. 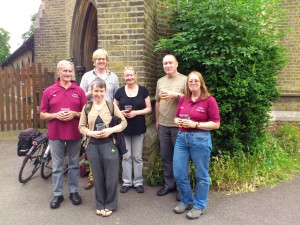 The best part about going second is that you are then free to drink the polypin of beer considerately provided by the organisers (as evidenced in our team photo). The childrens’ party that had been going in the adjoining hall then sent over their leftover food.  I’ve never seen sushi at a childrens’ party before, but then I’ve never been to Colliers Wood before either and standards are obviously rather different there to where I grew up (Bristol – a bit more faggots and peas).

So, the editor dashed off home to repair matrimonial damages, while the rest of the band chatted with our Surrey hosts. Many thanks to Surrey for their organisation and hospitality; thanks to Elizabeth for her conducting. See you next year !