Towers are fun. Bell ringing is fun. And beautiful.

The bells of Stepney (St. Dunstan and All Saints Church, that is) amazed me on that late August morning, when Julian took us on a tour of the tower. Before that time I had only seen the architectural and historical beauty of the church. Such tours are rare and available to few tourists, so I jumped at the opportunity – not anticipating where it would take me. I was soon hooked and started to attend the regular ringing practices.

The more I learn the stronger is the bond between me and the bells and, of course, the ringers.

A few weeks ago I had the chance to experience something even more amazing than “chiming of a few tonnes of metal” and this was the annual half-muffled ringing on Remembrance Sunday. On Saturday I joined Elizabeth, Ed and Julian, who went up the tower to put on the muffles.

Halloween still lingering in the air and the masquerade potential of the muffle too difficult to resist, Ed and I had fun “calling some changes” of personality. (Ed declining to appear with me here, but believe me, he did look funny.) 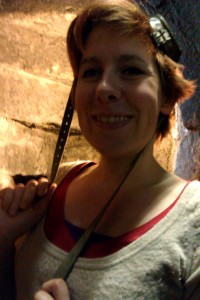 Eva modelling the muffles for Remembrance Sunday at Stepney

This irreverent bit of fun was followed by a dash of worry: Julian questioning not the propriety of playing dress-up with muffles, but whether the muffles were on the correct side of the clappers. Ringing the bells up – starting with the tenor, since its “new” clapper needs to be flipped over anyway – and turning them over a few times confirmed all was well and gave a sneak preview of the magnificent concert to come on Sunday morning.

Audio of half-muffled bells on Remembrance Sunday 2013 recorded outside of St Dunstans, Stepney

That morning dawned on us with beautiful sunshine and a fantastic, clear blue sky. Grandsire Triples and call changes filled the air. Then, as a final tribute to all those who lost their lives in the wars and never came home – all those ringers who never returned to their home towers – at Elizabeth’s suggestion the bells stood silent one by one ending with the tenor’s graceful and lonely chime to bless all souls.

Video of Elizabeth, Ed, and Julian ringing up the 3,5 and 7 bells on Remembrance Sunday

Note from webmaster – all of these videos, and others, are available at the Docklandsringers YouTube channel. Click on icon at bottom of right hand sidebar