It felt like a long time since the DRC had been on an outing, so I thought that I would attempt to throw together a day out for me and my fellow ringers. Some of you may know that I used to live in Chelsfield and work in Chislehurst, and to my shame, I had never rung at any of the local towers. Not having a car, the idea of trip to South East London and nearer Kent began to appeal.

An intrepid group met at the Wetherspoon’s pub in Lewisham at 9.00am to enjoy quite possibly the cheapest breakfast in existence. In a break with tradition, no drinks were ordered, but I must confess myself very impressed with the no-nonsense approach to swapping items on the breakfast menu. 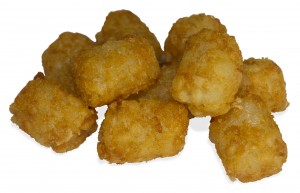 Having eaten far too many hash-browns (I swapped the beans and an egg), we set off for our first tower, St Mary in Lewisham. To my immense relief, other people had turned up and we ascended the tower with vigour. Hundreds of steps later, we arrived in the chamber and Dom commenced the ringing. The rounds rang out and the latecomers arrived – beware parking in Lewisham!

We left Lewisham in high spirits and jumped into the waiting cars. Trisha kindly took an advanced party to Chislehurst as we were running a bit late; you can imagine our surprise when everyone else turned up at St Nicholas late and she was not there. Whilst we began the ringing, Trish’s lady of the dashboard took her and her lucky passengers on a lovely tour of the south circular, which I think must have been the highlight of the day for several people.

Chislehurst presented a challenge. Being a ground-floor ring, it was quite difficult to hear the bells, which tested our ability to ring using rope sight. Thoughtfully, the ringing area is screened off by a curtain, so whilst some rang, others took the chance to look around the beautiful church. Jonathan quickly learned Grandsire double and then rang a flawless plain course. 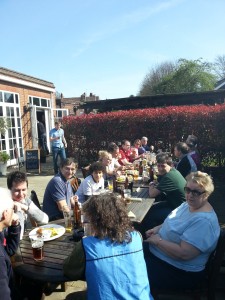 (Lunch in the sunshine, Chislehurst)

Lunch beckoned and we ambled en masse to the Bull’s Head. In an incredible stroke of luck, the sun shone and we found a table for 25 in a secluded secret garden just behind the pub. Orders were placed and, again, in a break with tradition, Pimm’s was the order of the day. An impressive volume of jugs arrived, although one question remained. Who was that cool, enigmatic man under the pergola picking at a ploughman’s? So suave, so mysterious so . . . Greg. Our final ringer had joined us!

With some walking in a slightly wonky line, it was onwards to St Mary Cray. It’s not often you get to ring in the middle of an industrial park, but if that sounds appealing, head to St Mary Cray. Nestled next to a dual carriageway and railway arch, the impossibly charming church sits defiantly in its garden. Whilst some rang, others enjoyed the sunshine. Jonathan rang a touch of Grandsire (we’re expecting 8-spliced next week!) and we all marvelled that the bells are hung on plain bearings. They go very well!

The final tower was now within sight, so the entire outing piled into Dom’s Micra (it was very intimate in the back) and rushed to St Martin of Tours. The sun began to set as the final bells sounded, but we acquitted ourselves well at St Martin’s and again very much enjoyed the opportunity to visit such a remarkable church.

The ringing finished, but of course, the outing had really only just begun. A minute’s walk away we pitched up at the Five Bells (a pub) and celebrated a mishap-free day. As it happened, this was not to be the last pub, but since everyone was drinking tomato juice and being sensible, I needn’t bore you with the details of what happened next . . .

The sun set on the day, and I would like to thank everyone who came along. It was a pleasure to welcome James and Alex from Lewisham, and Helen, who came along to our ten-bell practice at Stepney. Particular thanks go to Gill, Chris, Andrew, Trish and Dom for driving us to the towers and to Chris, Luke and Dom for running the ringing. If you’ve never organised an outing before, I can highly recommend it – give it a go and take us somewhere new! 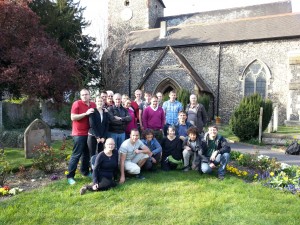