Although not officially sanctioned by the DRC, there were enough of us on the trip to make it feel a bit like an extended tower outing. Having driven to Bristol the evening before to enjoy the hospitality of Mr David Giles, we set out at an ungodly hour of the morning to meet the helicopter at Hartland Point. The journey was enhanced by an old packet of Murray Mints which I found in my coat pocket, but also by the increasingly beautiful countryside. As we neared the destination, we passed such places as Westward Ho! and Woolfhardisworthy (pronounced Woolsery), before a final stop at Bideford Morrison’s to use the cash machine. Speaking with others, it seems as if this is traditional part of the trip! Perhaps less traditionally, I came away loaded with Refresher Bars, which at 9p each, were a bit of a bargain. 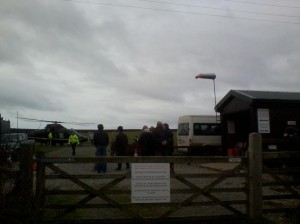 Hartland Point beckoned, and we soon met up with our fellow travellers. We checked in our bags and ourselves (including the terrifying part where you have to declare your own body weight) and enjoyed a final mainland-bacon sandwich. Some very keen people attempted a handbell quarter.

Landing on Lundy, we were ushered to the pub where the merry-making was already in full-flow. As anyone who has been to Lundy before will know, the first visit to the pub marks the electrifying moment where you order something on the Lundy tab, and as we all know, future-money spent is not really money spent.

Friday evening approached and with it, some open ringing at St Helena. Members of the DRC who find Stepney cold would be advised to bring a sweater. This ringer was more than a little excited to have a go, in advance of the next day’s impending peal attempt. 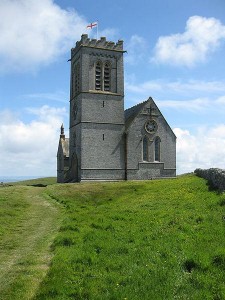 Saturday morning arrived, and amongst the quasi-corpses lying around Milcombe House, several stirred and began preparing for the first of the week’s ringing attempts. We ascended the tower, took our places and having check that the ropes were the right lengths, Grandsire Triples commenced. Expertly called by Ed Hughes d’Aeth, the first hour went by without too much trouble, once the tall, blond ringer on the third bell stopped trying to double-dodge every time in 6/7.

Another hour went by, and apart from a cold nose, there had not been too many mishaps. Over half way through, there was a tacit belief that it might actually be achieved. The ringing quickened. The concentration deepened. The end hastened. All of a sudden, about to go into 4/5 up, the final single was called and floating into long thirds, that was all.

Relief washed over the band, but perhaps mostly me. This was rapidly followed by awareness that my arms and legs felt leaden and that the only cure was surely to be found in the Marisco Tavern. Triumphant, we descended the tower and head for the bar. The rest of the day was a bit of a blur. . . 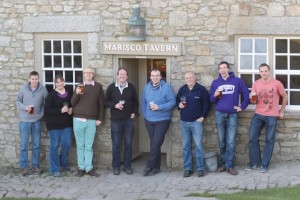 That was the last ever peal rung in the extra-parochial church of St Helena of Lundy, for the next day, Lundy became its own Parish. The RAF was very obliging in flying a vicar all the way over from the mainland, and, with perhaps the largest ever congregation, St Helena celebrated its first intra-parochial even-song.

The jubilations continued into the evening with a fabulous Christmas dinner for 35 (including the vicar). Perhaps this could only happen in England; perhaps it was madness. Potatoes were mashed, cranberries were cooked. Spread across four ovens, a crack-team of basters ran across the island ensuring that the two geese and two turkeys stayed moist on the inside and crispy on the outside. At the appointed hour, the birds appeared on the Milcombe kitchen table and dinner was served. The roast was followed by some mouthwatering home-made Christmas puddings (smuggled across in several suitcases). The rest of the evening was a bit of a blur. . .

Sadness ensued the next day as we realised that we were only there for the weekend, and with a heavy heart, we began saying goodbye to the week-long visitors. Looking at the mountain of dishes in the sink, it was a bit of a relief that we had a helicopter to catch!

And so, the long trip home. Disappointment at not seeing a single puffin was soothed when we took a train along something called the Tarka line, which was an unexpected treat!

A stellar weekend, and testament to world of ringing. I was thrilled to achieve my first peal, and was also glad to hear that it was a first for David Giles too. Many thanks must go to Luke Camden and Rhiannon Meredith for the organisation. Ringing is a communal hobby, and it would not have been possible without the fellow seven peal-ringers, but also without the time, effort and dedication of everyone who contributes to teaching ringing and to running practices, which allows newer ringers like me to take part in this rewarding, if bizarre, activity. Thank you to everyone who has helped and continues to help me on my way! 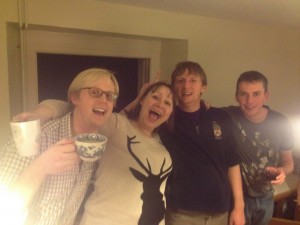