The parish fete held on Sunday afternoon 13th July is always a high point in the Isle of Dogs social calendar and this year’s event was no exception. Opened by local MP Jim Fitzpatrick, the event was held in the large vicarage garden to the rear of Christchurch, and the Charmborough ring was erected at the entrance to the Garden. Although we could have done with a few more ringers for the first hour and a half, we entertained a steady group of people, giving quite few of them the chance to try a few backstrokes and then ring backstrokes in rounds.

Local Pearly Kings and Queens were present, as were the local scouts and cubs, quite a few of whom had a go. One of these was the daughter of Paul Ashton, who used to ring at St Dunstan’s Stepney.

Buki Rufai, one of the people that we have been teaching at Christchurch for the last five weeks also had a go, and after a little while was successfully ringing rounds on six, on her own. This only goes to show how much quicker people can learn to ring on an easy-going ring of bells like the Charmborough Ring. Who knows what we could be achieved in a whole day!

Fr. Tom Pyke, Vicar of Christchurch learnt to ring before he became a priest, and at his last Parish (St Paul’s in the Jewelry Quarter, Birmingham) was instrumental in having a new ring of ten with a tenor of 12 cwt installed. His other claim to fame is that he married Richard Grimmett, captain of the band that has won the National 12 Bell Competition each year for the past 5 years! Fr. Tom also enjoyed joining in the ringing on the Charmborough ring during the afternoon.

We look forward to working with Fr. Tom and the congregation at Christchurch over the coming weeks and months to increase the number of active bell-ringers at Christchurch and to re-establish an active local band. 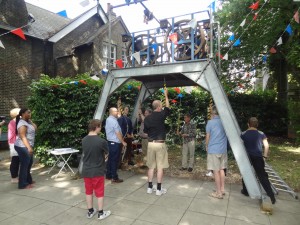 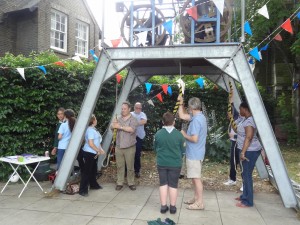 Local cubs and scouts have a go