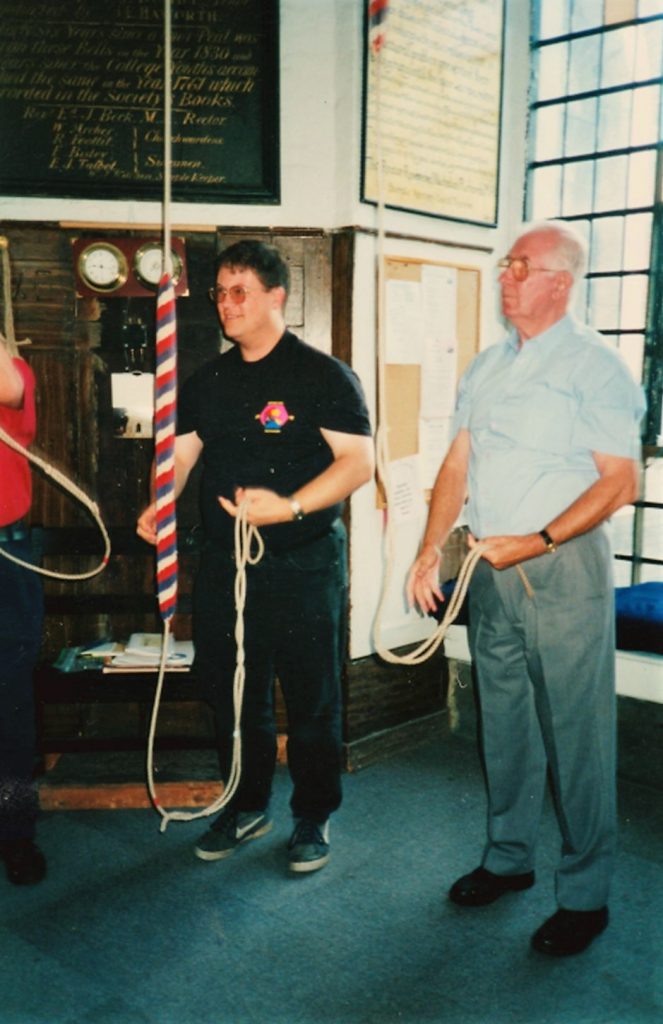 Fred covering on the tenor (right) with then tower captain Martin Crick (now of Richmond) on the 7th.

Fred was a valued member of the band of local people that rang the bells at St Mary’s Rotherhithe, after they were restored in 1996-9.

The old heavy ring of eight at Saint Mary’s went in and out of being ringable several times, with tower sway causing structural problems. During the 1970s a band of ringers affectionately known as the ‘flying circus’ included St Mary’s in their Sunday morning rota, which stretched from Kensington in the West to Deptford in the East. After the 1987 hurricane which left the Isle of Dogs bells unringable, ringing resumed at St Mary’s, although Fred did not ring with us at that time. St Mary’s bells became unringable again, just before the old bells at St James’s Bermondsey were replaced in 1990.

Fred’s profession was a lift engineer, and he had recently retired when St Mary’s were reduced in weight and lowered in the tower to reduce the sway, in 1996-9. Fred was one of a group of local people who came forward at that time to ring and there is a plaque recording his name and the other local ringers who rang for the millennium. Fred himself must have learnt to ring in the 1960’s, although we know very little about the local band then, but as he had rung before he could ring more or less straight away.

Fred was an active member of the church, reinforcing the link with the local community, and was always there for Thursday practices and Sunday morning ringing. Unfortunately, Fred suffered a stroke about 15 years ago, so his second ringing career was cut short, and this was a significant loss for the local band.

His funeral was on 30 January 2017 and a  half muffled quarter peal was rung prior to the service, at his request.