When we received the first email from David (Giles) in May we were sailing in the Baltic and a bellringing trip to Lundy seemed like a good idea.  I wasn’t too keen on the dates proposed but felt  sure that they would be changed but no they weren’t.

Arrangements were made and plans organised still no change of date.

As of 2007, there was a resident population of 28 people, including volunteers. These include a warden, ranger, island manager, and farmer, as well as bar and house-keeping staff. Most live in and around the village at the south of the island. Most visitors are day trippers, although there are 23 holiday properties and a camp site for staying visitors, mostly also around the south of the island

We had been promised a trip in a helicopter which was one the reasons Janet want to go as she had never flown in one. The down side was the baggage limit, which made Ryanair’s allowance generous, of just 10 Kilos plus a small hand bag.  Janet had bought herself a Rufus Roo jacket which is worn under your coat with very large pockets and can hold up to 10 Kilos. When she was asked her weight at check in she added a stone to her weight. We were only going for a long weekend with bellringers so how much clothing does one need. 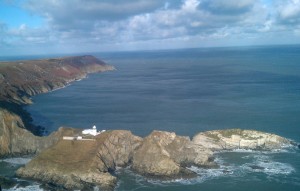 Approaching by helicopter from the South end

Here we were a party of 18 crazy bellringers, mainly from the  Docklands Ringers with David’s parents and other friends, on our way.   At least we would have the island to ourselves. Who else would be crazy enough to be going to Lundy in Decemebr.  I was assured by David that the pub would be open that we would be able to get food there and there was also a shop.

To catch the helicopter we had to be there by 10:00 for a safety briefing.  To get there by 10:00 would mean leaving London at about 04:00 so we decided to go down on the Thursday and stay in a B&B about 10 minutes from the heliport.

The forecast was for gales and a cold front.   I wondered if the helicopter could take off in very strong wind but was assured they would.  The day was bright and sunny but there was quite a strong cold wind.  We had the same safety briefing as one would have in any commercial flight we were even told where to find our life jackets under our seats.  If we had to ditch in the sea it would take longer to find the jackets and put them on than we would have time.  We were only flying at a few hundred feet over the sea.  Surprise surprise we would not be the only visitors to the island, as there were at least another dozen going.  We were told that it cost £1,600 per hour to keep the helicopter flying so they wouldn’t be wasting time.   They planned 3 round trips every hour. The helicopter held the pilot and 7 passengers.  One of the lucky passengers would get the hot seat and sit with the pilot. 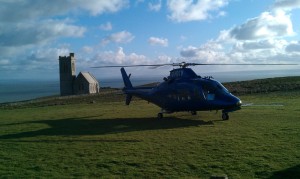 The flight itself was noisy but there were some good views.  The seating was cramped but the flight only lasted 6 minutes.  We approached Lundy from the south where most of the habitation is and could see the church as we arrived.  The passengers cross first on the way in and the baggage last.  On the return trip it is the other way round.  The baggage is delivered or collected to or from your accommodation.

So the first thing to do was visit the pub, sorry the Marisco Tavern, and have a coffee, then visit the shop before it closed.  The shop hours were a little limited so you needed to plan in advance when to go.   It wasn’t a Waitrose but for a small island shop cut off from the mainland it was well stocked  The prices were reasonable considering its location.  If you have any particular requirement they can be ordered in advance and be waiting for you.  We then returned to the tavern for lunch.

Whist in the tavern we met two family who had not rung previously so they were invited to come up to the tower and have a go.   One family had been to Lundy several times and never heard the bells rung.  They live very close to a tower in Gloucester which has an active band.  By the time the weekend the youngest daughter was just about ringing rounds and she even managed to pull the tenor off unaided.  We were hopeful that they will continue with their ringing.

On the Friday evening the warden gave a talk about the island.  She explained that the entire island has been designated as a Site of Special Scientific Interest and it was England’s first statutory Marine Nature Reserve, and the first Marine Conservation Zone, because of its unique flora and fauna. It is managed by the Landmark Trust on behalf of the National Trust. 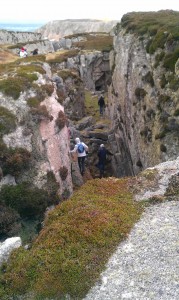 Saturday evening David and his parents had planned a Christmas dinner of roast turkey with all the trimmings.  Quite an undertaking .  To cater for 16 in a strange kitchen with some of the ingredients having to have been brought  from the main land.  Millcombe House, where half the party were staying is large enough  to accommodate such a gathering.  The tables had to be rearranged but there was a seat for all in the dinning room. The evening was a great success.  The food was cooked to perfection. There was just the right amount with everyone having plenty to eat with nothing left over.  I must congratulate them for a splendid evening well  done.  The only drawback was half the party had to walk back in the dark to their accommodation. 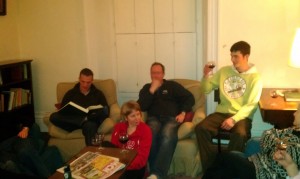 The island has no street lights so a torch is an essential.  Most of the accommodation is quite a walk from the Tavern and the pathways are rather rough. The up side being that as there is no light pollution the night sky can be brilliant. On the first night there was a clear sky and the stars could be seen in all their glory.  Walking over the island could be quite difficult with several  of us slipping and coming a cropper in the mud.

On the Sunday morning there was no ringing.  No service. In the  church.  However instead of  a lie-in  the warden had arranged a walk of the island.  The weather was threating to rain heavily.  The warden made in most interesting and it was well attended.  However the ground was quite marshy in places and the ground very slippery.   We all returned to the tavern in time for lunch.

Going for a walk

The Tavern is the centre of the village it had a roaring log fire going most of the time.  When they have bellringers they usually have to order in extra supplies of beer. On one occasion a group of bellringers on a stag do drank the tavern dry and complained.  They were told that extra supplies had been ordered for the stag do but no-one had told them that they were also bellringers.  We certainly did our best to drink them dry. The food was good but you did have to arrive on time.  If you arrived late there was either a very limited choice or they were closed.   Sunday evening roast was typical.  Those of us who were  hungry and early had a full choice of roast pork , roast lamb  and roast chicken.  By the end they had sold out completely.

Monday morning was wet and cold. A quick trip to the shop for some souvenirs and settle your tab at the  shop and tavern.  Return to the Tavern for a safety briefing and see which flight you were on.  The baggage is flown off first so that as you arrive it is waiting for you.  Agin there were 3 return trips an hour.  The whole process went most smoothly.  Though we got quite a soaking waiting the few minutes we were out side.  They was very little visibility so the return trip was not memorable.