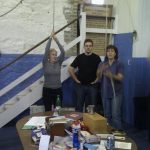 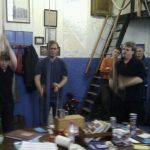 It’s not about appearances or industrial action: the training session held at Camberwell on Saturday morning 14 May was dedicated to improving striking by sharpening listening skills.

The exercise was preceded by the circulation of John Harrison’s excellent recordings ‘Listen to Ringing’ and ‘Listen to Ringing Live’, CDs published by the Central Council of Church Bell Ringers. Almost everyone present that morning had had access to the disks and most had spent some time going through the listening exercises.

Because none of us rings very regularly at Camberwell, our chosen location simulated (more than our home towers would have) the ‘unfamiliarity’ that is usual when ringers gather for a striking competition.

Andrew Clark introduced us to the basics of a striking competition from the perspectives of both ringers and judges. This was because while half of us would be ringing, the other half would be judging. He also produced sufficient notepads and pens for everyone! What a star.

With more than a dozen ringers, we were able to form several 6-bell bands of varying combinations including, as near as possible and to give those ringers an extra bit of practice, the two Stepney bands entered in the Middlesex North and East District 6-bell Striking Competition at Tottenham the following day.

While one ringer acted as Marshall, those who were not ringing trooped downstairs to sit in the church yard and mark the ringing. The fact that the exercise engaged everyone throughout the morning was one of the best aspects of the day, and the judging was a challenge to experienced and novice ringers alike.

Listening skills definitely appeared to sharpen as the morning progressed, and both ringers and judges grew better at their jobs. Judges compared notes with their colleagues as a gauge of how accurate their marking was (always making allowances for a certain amount of subjectivity). They also fed back to the bands with constructive observations.

Another of the morning’s star performers was Jenni Pinnock, who is still not that experienced in call changes and who had never before rung at Camberwell. Jenni rang very well under challenging circumstances in two call change bands.

Over the course of the morning both bands were able to ring two sets of call changes each. Then we rearranged and, with the help of visitor Margaret Rueger, there were also two methods bands: Plain Bob Doubles and Plain Bob Major, which was the Stepney ‘A’ Band test piece.

Everyone agreed it was a good session and something that could profitably be repeated. The training committee have scheduled an 8-bell training session for 10 September, which will also encompass more listening, judging and… improved striking. So put the date in your diaries! And, if you haven’t yet had John Harrison’s listening exercises on CD, let Elizabeth know.