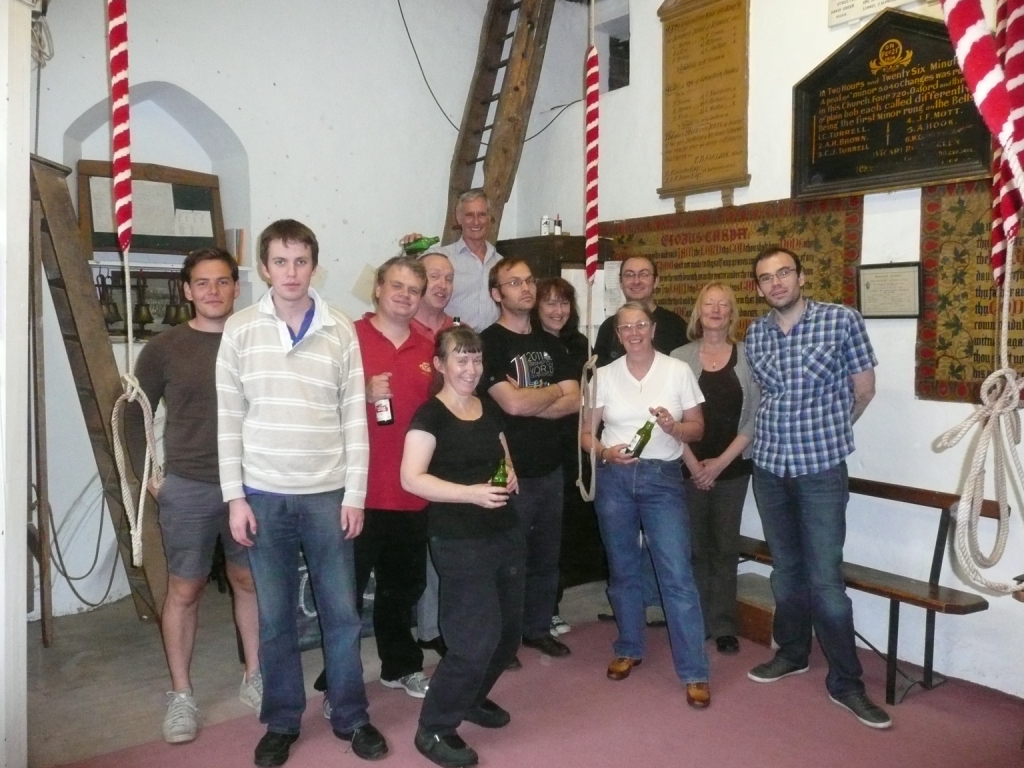 It was a small but select band of Docklands ringers who were available on the Saturday of the August Bank Holiday weekend…. but certainly enough to enjoy a day out organised by Chris Giddins to visit towers in the area where he learned to ring.

We eventually met at the first tower – after various phone calls to ascertain the whereabouts of the nearest car park (recommended  by Chris, who had given it the name the locals use, rather than the one on the signposts!) – and enjoyed the first ring of the day on the bells of Holy Trinity church, which had been Guildford Cathedral until the 1960s. These were not the easiest of bells on which to start the day! 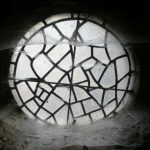 It was only a short walk down the High Street to the next tower, but by this time the weather (well, what did we expect on a Bank Holiday weekend?) had changed from slightly dull to a torrential downpour, bouncing off the tarmac so that even though with the foresight to bring umbrellas got wet. St Mary’s is currently closed for major restoration work, but we were able to pick our way in through the scaffolding and through the cobwebby roof space to reach the ringing room. The first ring on a building site – and for some of us at least – the first on an anti-clockwise ring too. 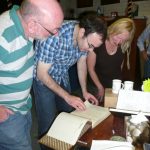 Just before lunch we made our way down to the river, where Chris’s father met us – making up the 10 needed to ring all the bells at St Nicholas. Those of us on the ringing centre committees were interested to see the teaching aids available in this tower, which is the HQ of the Guildford ringing centre – while Chris reminisced through the records of the quarterpeals he rang years ago!

St Nicholas’ church being conveniently placed immediately opposite the White House pub, we didn’t have far to go for a substantial lunch before making our way out along the river to Shalford. For some of us this was a lovely walk by the water (fortunately no longer raining, and the paths not too muddy) and a chance to examine the wildlife – including some plants which intrigued us, and were later identified by Elizabeth as the invasive Himalayan Balsam. 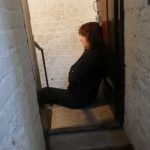 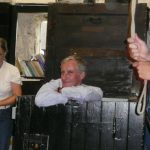 Shalford’s tiny ringing room proved a little claustrophobic for some (Trish preferred to sit on the stairs!) … and Wonersh too was a little short of space for even our small band of ringers – but each tower offered an interesting ring of 8. 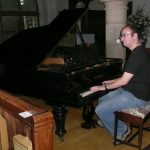 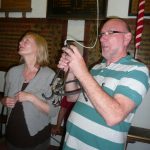 The last ring of the day was to be on the 6 at Bramley. We were lucky that the church was open to the public, as there was no-one there to let us in to the tower. We were however well entertained by Chris’s friend Chris Snelling, who made excellent use of the church’s grand piano whilst Chris Giddins applied himself to tracking down the keyholder, who finally appeared bearing not only the key, but also a supply of bottles of beer as an apology for his late arrival! We ended the day’s ringing there, though sadly the spider fell apart when we tried to replace the ropes on it…

Bramley was the end of our ringing, but not the end of our day, as Chris had invited us all back to his family home – and the weather was good enough for us to explore the garden whilst his sister put the finishing touches to an excellent supper, and those who were not driving back were able to enjoy the beer and wine!

Many thanks to Chris, six interesting towers, our pianist and caterers for an excellent Bank Holiday Saturday!

1 thought on “Guildford Day out”