I just wanted to write and say thank you to all those who sponsored me for the London Marathon and in support of Southwark Cathedral Bells.  The total amount raised is phenomenal.  I really enjoyed running the marathon (for once!) and feel humbled by everyone’s good wishes.

It is good to be able to repay something back to the world of bellringers having been in receipt of so much training, support and encouragement  – mostly and especially from Andrew and Jonathan, but also from people in every tower I go to where there is always a welcome and inclusion in the ringing.

I’ve put a race day picture on the www.virginmoneygiving.com/gillianharrisbells where you can see just how much money has been raised. (When I can get the gallery working, I’ll upload a few more!)

Thank you very much again

I watched Gill run past the 10 mile mark on Salter Road at Rotherhithe and had to sit down and rest afterwards with the effort.  I think I’ve seen Gill three times from this point (as it is opposite a rather good blues band) and thought this was the most relaxed and happy I’ve seen her.

I’ve attached a few photos that Gill and Trisha sent me. 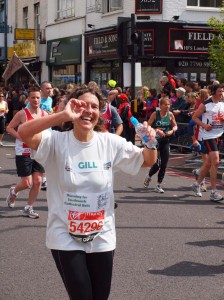 The happiest marathon runner of the day 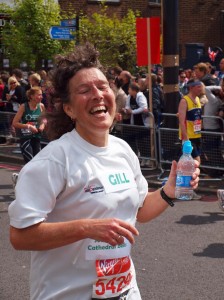 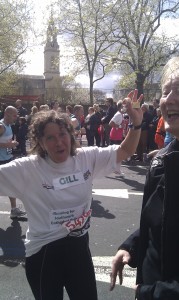 Gill times her run past St James, Bermondsey for 12:00