On Saturday June 1st, several DRC cars headed off to Tooting on the first leg of our Spring outing.

I was fortunate to be offered a ride in Trisha’s new ‘eBay’ car.  Although Alison sat in the back with the maps, all of her instructions were ignored while Trisha and I decided on a sequence of incorrect directions – even managing to point in the opposite direction a few times. Eventually, Trisha got fairly close to the Church (All Saints at Tooting) and threw us out promising to park the car and find us later.  Arriving late did mean we didn’t have the fag of ringing up some astonishingly light bells. 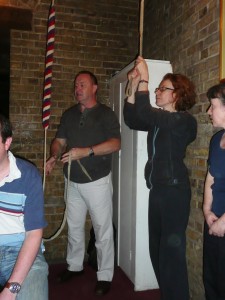 Andrew and Jennifer a bit perturbed by some unexpectedly light bells

St Leonard’s was  a pleasant ring of eight and Trisha’s cunning parking ensured a quick exit on our way to The Prince of Wales pub at Cheam.  This had been recommended by the Cheesemans’ and was a bit of  a hit with decent beer and large portions of good food.

All Saints at Benhilton (in Sutton) was a lovely church with eight good bells.  At this point the webmaster realised that Andrew Clarke had planned an outing covering all the places in London that the webmaster had lived in during his first 10 years in London – unfortunately he didn’t ring bells then, so hadn’t been into any of the churches before. 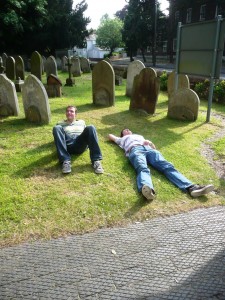 Ed and David resting after their efforts

Some interesting scheduling by Mr Clarke then had us going back to within 50 yards of the Prince of Wales in Cheam to ring at St Dunstan.

The final church was St Mary at Ewell which had the best ringing chamber paint job that the editor has ever seen. 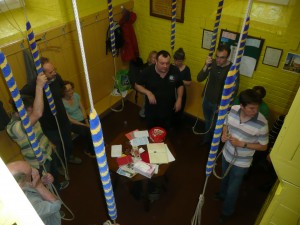 So, a big thank you to Andrew Clarke for arranging an interesting collection of towers in a part of London that most of us hadn’t rung at before. Thanks to Jonathan (a.m.) and David Cloake (p.m.) for conducting the ringing, and thanks to Morag for some good photos.