One of the more entertaining tasks as DRC webmaster is to deal with the various queries that come in via email that aren’t directed to a specific person or post. So, an enquiry back in December from a Best Man planning a stag event rather intrigued me. 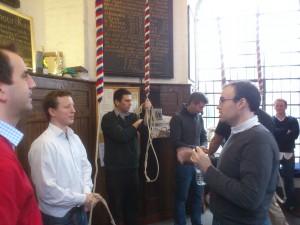 The groom was a ringer, so the best man wanted a ringing theme and wondered whether we could run a taster event for the group. The offer of payment focussed my attention and the DRC committee agreed that a fund raiser was always a good idea. Half a dozen helpers stepped forward and we all assembled on Saturday 8th.

There were 10 in the party and an early start was arranged for obvious reasons. Small groups were given individual coaching while the rest were taken on a tour of the bell tower and given a bit of history about the practice. 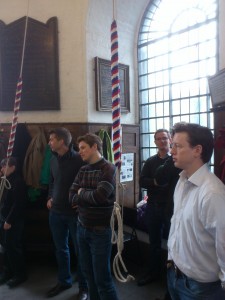 After joining the helpers in rounds, the lads were put into teams for a striking competition judged by the groom. Not quite sure which team won, but we gave them a bottle of wine as first toast of the day. Andrew L also provided a left over bottle of rum brought back from Cuba several years ago. This was voted ‘worst drink ever’ by the staggers. The author suspects they drank worse before the day was over.

The staggers left for their next event which I think was curling if I heard properly. The DRC retired to the Mayflower to count their windfall. I think everybody enjoyed themselves and, who knows, perhaps we may gain some future recruits. A big thank you to all the helpers for giving up their Saturday morning. 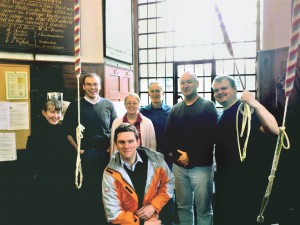