When David Giles left London for the bright lights of Bristol about a year ago, we reckoned that we would at least get a pretty decent away trip to make up for the loss of an enthusiastic, skilled ringer and enthusiastic but hopeless drinker. It took him a while to get organised as he seemed to prefer organising trips to nearby Lundy instead, but eventually he sent out a date and itinerary to us all.

As a native Bristolian who couldn’t wait to leave in 1973 and have rarely been back since, I was slightly curious to see how the city had changed – it could only get better after all.  The towers that David selected were all in the small section of central Bristol that both the Luftwaffe and the town planners had missed. My memories of the area were clouded by huge quantities of keg beer and scuffles with invading Welshies, so I was interested to see a more refined aspect of the town. David certainly came up with a good selection including

Most of the attenders piled onto the 08:00 from Paddington while a couple of cars also made the trip. Pip ‘n’ Jay was close enough to Temple Meads station to be but a short walk.  After eventually finding someone to let us in, we enjoyed a few tunes on the ring of eight. 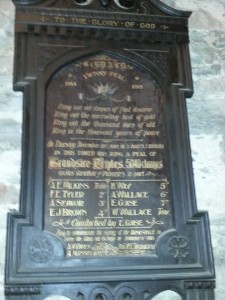 A pleasant stroll across one of the many waterways and into the mediaeval part led to St Johns on the Wall which, eponymously, is inside one of the few remaining section of the old wall. This is a very attractive church with lots of old galleries, organs and stuff for the non-ringers to play with. 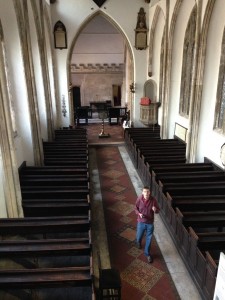 David at St John on the Wall

Strolling up the hill opposite the cathedral took us to our designated lunch spot at the Green House.  The beer was very good, but obviously I’ve forgotten what it was. Food was fine too. Good choice David, and I’m sure he enjoyed the research. 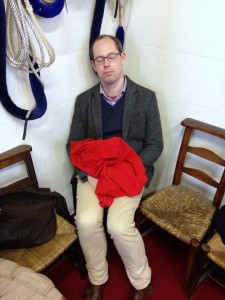 DRC sleeper at Bristol Cathedral – not a ringer of course

So, on to the cathedral which is always a bit daunting for the less experienced ringers.  It was all very non-threatening though with an easy ascent, large clean ringing chamber and easy bells. At least three of the group found the atmosphere slightly too relaxing and partook of a very nice after-lunch nap while their colleagues played them a soothing tune or two. 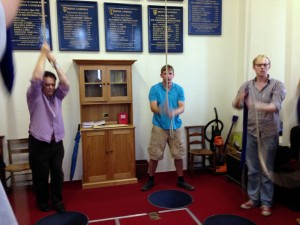 DRC at Bristol Cathedral – the wakers

Back through the Old Town with Andrew L boring everyone with unlikely tales of the origin of the phrase ‘cash on the nail’ – sounds a bit too like a game show to be convincing. Final tower was All Saints which is not used for public worship but is still in use as a place of learning.  It is allegedly the nearest tower to another tower just the other side of the alley, but I forget its name. The bells here were pretty tricky and definitely best left to the experts.

That was it.  The train party headed off to Temple Meads and London. A big thank you to David for arranging a splendid day out, and thanks also to those who took on the ringing organisation at the various towers. Thanks to Jonathan for a few pics – please send me any interesting ones and I’ll add them  as mine were rubbish as usual.