It was such a treat to have the bells ringing out so beautifully for St Peter’s Day on Sunday – thanks so much to you and the team! It really made a difference to the festive feel of the day, and I hope really did alert parishioners to the significance of the day and indeed of the procession making its way around the parish. It’d be lovely to combine again at some point. With joy,

On Sunday 29th June, there was a large congregation to hear the bells, as we attempted a quarter peal of Plain Bob Minor as the procession left the church after the festival mass. Eva was ringing the treble, and it would have been Eva’s first of minor, also Drew’s who was ringing the 5th. As St Peter’s are so light and manageable, you are able to do things which would not be possible on heavier rings of bells.

The ringing soon settled down, but we lost the quarter after about 300 changes as two bells crossed over. We did try again, but as often happens, the ringing the second time was not as good, so we decided to ring the bells down after about half an hour’s ringing. Never the less the parish appreciated their bells being rung, especially as nowadays they are rarely rung, and not on Sundays. It was also good to probe the boundaries, and certainly the band could have scored a quarter. It shows that we can move on to ring more minor, rather than so much doubles.

Reading the plaque in the ringing room, it was also the 13th anniversary to the day of the completion of the restoration and the bells being dedicated, so perhaps there will be better luck next time! 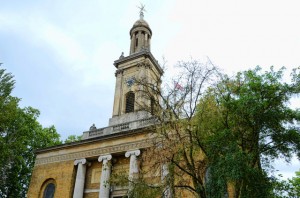