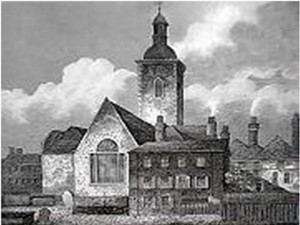 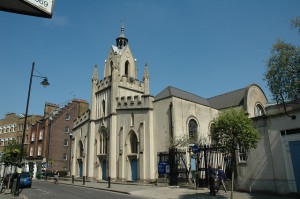 This Saturday, 20th September, the sound of Church bells ringing the changes will be heard again for the first time in over 180 years at St Mary Magdalen Church at the corner of Tower Bridge Road and Abbey Street in Bermondsey. Bellringers from the daughter church of St James’ will erect a mobile belfry in the churchyard at St Mary Magdalen as part of the Bermondsey Street Festival, between 12.00 and 4.00pm.

Parts of the tower at St Mary Magdalen date back to 1290, and there are records of 14 peals being rung on the bells hung in the tower. The first was 10,080 changes of Plain Bob Major rung by the College Youths on 18th May 1728. This was one of the very earliest peals rung anywhere.  The first ever peal was rung in Norwich less than 10 years before.

On Saturday the band from St James’ will be bringing the Charmborough Ring, a mobile bell tower for the day and demonstrating the art of ringing the changes. There will also be the opportunity for members of the public to have a go.

St James has a peal of eight bells and an active team of ringers, although their leader Roger Booth say that they could always do with a few more ringers. The team also mans the ropes at nearby St Mary’s Church in Rotherhithe and is offering would be ringers an intensive series of lessons so that people could learn the basics in a week, and then join in with the rest of the team at their regular weekly practice sessions at St James’ at 7.30pm on Tuesday evenings.