Whitechapel, a 500-year-old marvel in the 21st Century in the Heart of London 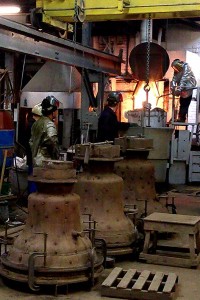 One Thursday morning, 18 September 2014 I cycled up to Whitechapel to witness something amazing: three new bells being cast. Once everyone (including nosy bell ringers) had arrived, Mark Backhouse, the Works Manager showed us through the courtyard and into the main workshop, where we took our place behind the almost invisible yellow line that serves as a sign of the health and safety zone. We immediately travelled 500 years back in time, as nothing had changed much over the centuries, except perhaps, that the furnace is now not fuelled by charcoal but oil. However, we wouldn’t witness that, only the roaring of the immense heat that – over 5 hours – melted 20 cwt of bell metal, mainly copper and tin. 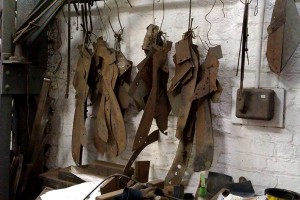 The floor was covered in dust, while the walls were full of handcrafted tools, bell shaped gauges to form moulds, among them the one that had formed the famous Big Ben; human-operated, chain-driven pullies and lifting systems; a great tank of sticky moulding material (loam); an oven as big as a double room to air dry the moulds (this place does not need too much heating in winter). This is a craft that produces handmade bells from beginning to end using hardly any machinery. By the way, did you know that each foundry has their own shape of bells, their own individual sound? This is called the “Whitechapel profile”. And as Ben Kipling was kind to explain: “Actually there are a few slightly different “Whitechapel profiles”: “Whitechapel Old-Style profile”, “Whitechapel Mark I Simpson profile”, “Whitechapel Mark II Simpson profile” and “Whitechapel Mark III Simpson profile”. “The sound bow of a Whitechapel bell is typically slightly larger and taller than the sound bows of most other bells, and the exact curve of the waist and crown also varies slightly.” 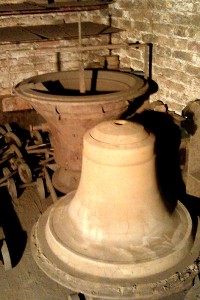 As we learned, the loam for the moulds is made up of sand, clay, horse manure, goats’ hair and water, to add up to a sticky, mud-like substance that is shaped to fill in the inside and cover up the outside of the wannabe bell. When the desired shape and size is formed using the locally crafted tool (the gauge), the mould is set into the drying oven. Any cracks appearing during this process will be filled in until the surface is perfectly smooth. You don’t want any excess metal. 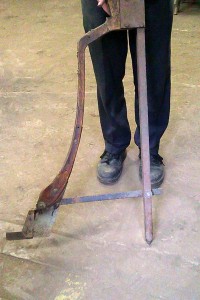 The mould is then sealed together and placed on an iron stands, ready for the metal. The metal needs 4-6 hours to melt in the furnace at around 1100 degrees Celsius, depending, of course on the size of the future bells. Believe it or not, there aren’t overly complicated mathematical calculations on how much metal is needed for the bells, it is in the instincts of the foundry workers and in the air and tradition of the foundry, I guess. Then it is poured into a huge “bucket” (crucible) that helps carry it to each mould. 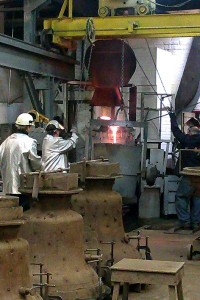 But before that, any impurities that there may be get scraped off the top of the liquid bell metal: only the finest bronze deserves to become a bell. 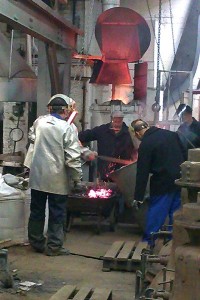 And the magic started here: a water-like, glowing, fiery metal was poured into the mould letting out hot air and methane gas. It resembled a mini volcano. The powder on top helped retain the temperature to keep the top metal molten until the rest of the bell had begun to solidify. And another fun fact: the animal hair in the mould does not only keep the mould together but burns from the heat during the casting, giving its place to tiny air vents that allow extra pressure to escape and prevent the mould from blowing up.

Then they were left to cool. It can take 3 days, but if they are huge tenors, it can take up to a week or two. When done – it starts feeling like a recipe –, the mould is carefully lifted to reveal the newly cast bell. 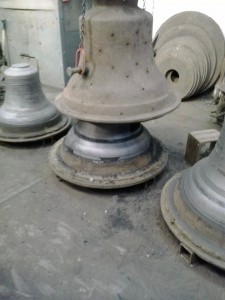 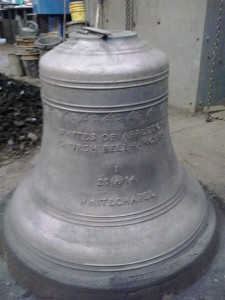 The bell is then taken to the neighbouring workshop to get tuned. I never have thought it was this complicated, but they don’t only get tuned for one, but five notes, so that the overall tone will give the most pleasant possible sound, that will distinguish them from buckets. In the tuning workshop we learned from Ben, that as a bell gets thinner its sound gets to lower and lower notes. It is again not without importance which part of the bell the metal gets removed: as we saw on two old bells (so old that they were tuned with chisel and hammer), if you carve the inside of the sound rim, the note gets lower, whereas if you chip off metal from the lip, the note gets higher. Isn’t it interesting? 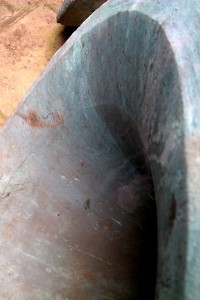 Tuning today is done with a machine, making it somewhat faster, but still a lot depends on the bell tuner’s perception of and satisfaction from the overall sound of the bell. 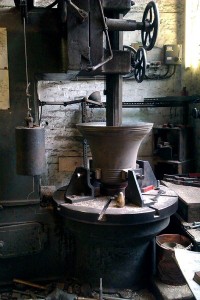 When the bell is trained to sing properly, it goes to be prepared to get hung in towers. In earlier times, they had loops or canons, cast together with the main bell, today bells are cast with a flat head in which holes are drilled that serve to attach a headstock to it. Such canons, and quite fancy ones too, can be seen in this picture with monkeys who want to “hear no evil” (or are they just complaining that the tuner neglected his job? I don’t know). 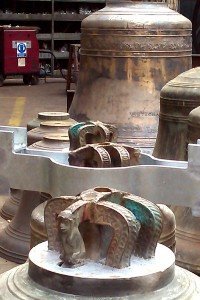 The craftsmen here are all wonderful people and pay careful attention to what they are doing, maybe that’s why Whitechapel’s bells are so outstanding across the world. I cannot thank them enough to let me witness such a magnificent event, but can only encourage everyone to visit the foundry and experience one of the few workshops where the products are still handmade after hundreds and hundreds of years of tradition and thus individually unique and marvellous.

Proofread and adjusted by Ben Kipling