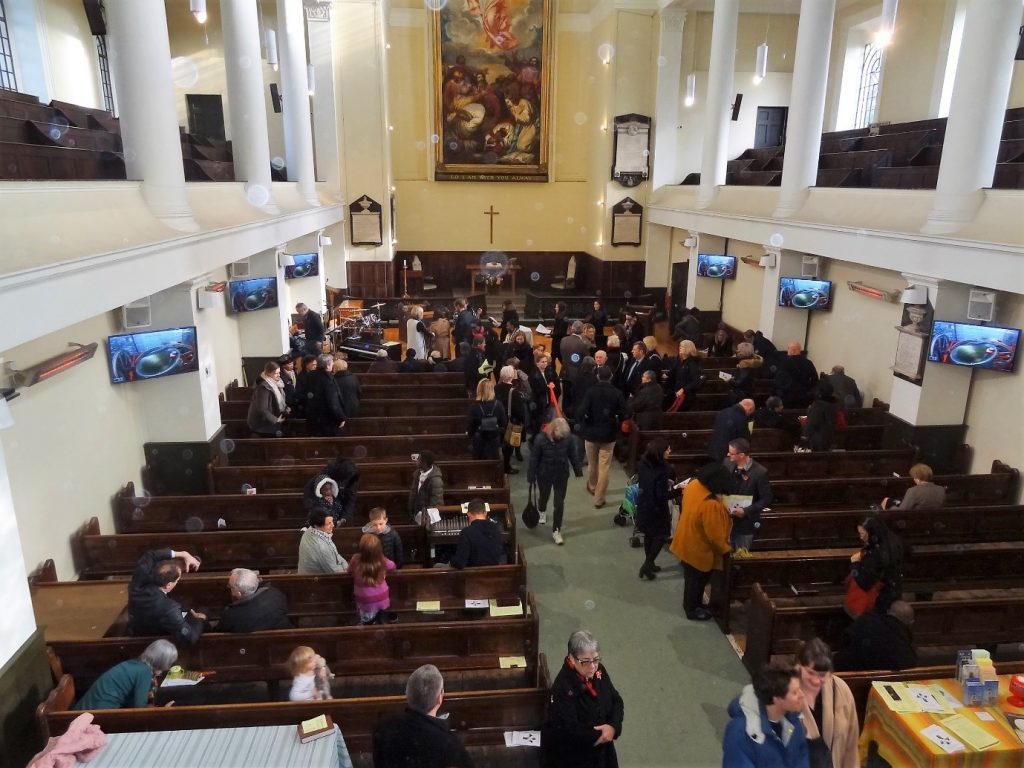 Remembrance Sunday 2016 marked the 25th anniversary of the installation of the current ring of eight bells at St James Bermondsey. The 25th anniversary was marked by a short ceremony during the morning service, when the vicar Canon Gary Jenkins invited the ringers to the front and in the talk that followed displayed some pictures of the local band and some before and after pictures of the restoration on the large LCD screens that go down either side of the nave.

Earlier in the year the Docklands Ringers had won a £400 prize award from The Association of Ringing Teachers for ‘Innovation in Social Media’ to recruit new ringers. We have used this award, together with a £200 grant from the Surrey Association of Church Bell Ringers “Fellowship Fund’, some of our own funds and money donated by own ringers to install a set of four CCTV cameras, compatible with the audio-visual system in the church. For the first time, we were therefore able to beam live video pictures of the ringers and the moving bells down into the church at the end of the service. Members of the congregation were also invited to come up to the ringing chamber and meet the ringers and some had a go at ringing back strokes. The clergy, churchwardens and members of the congregation were all very impressed.

The previous day we held a reunion for our ringers, with a meal in the local pub at the corner of the churchyard. Over the last 25 years we have taught many people to handle at Bermondsey and of these 27 have gone on to become regular members of the Sunday band. In addition, a steady stream of ready-made ringers have moved into the area, and we have unearthed some lapsed ringers. This has resulted in a further 22 people becoming members of our regular Sunday band. That’s a total of 49 ringers – almost two new ringers a year. Of these 55% have been taught to handle locally.

We have also been able to extend the skills of those 22 ready-made ringers, many coming as rounds and call change ringers and going on to ring surprise. We have also made a habit of welcoming a significant number of regular visitors to our practices and helped them to progress too, even though they have not become members of our Sunday band.

Bermondsey is very much an urban parish, and there is a high turnover in the local population. Not only do we find that we have attracted a steady stream of ready-made ringers, but a significant proportion our ringers move away after a period of time. About 36% of our Sunday band have moved away over the last 25 years, although we know that at least a third of them have joined a band elsewhere. Another third have moved overseas, the most interesting coincidence being Chris and Jillan Rusch, who joined the band at St James Cathedral, Toronto, Canada. The back ten of this ring of twelve being the old Bermondsey ring of ten. Two of our band have also gone on to be tower captains in their new towers.

A small percentage of our Sunday band have gone on to join other bands nearby in London and about 30% of our regular band still live locally, but are no longer active for various reasons. We do try to keep in touch with all our lapsed ringers and hope that they will return to ringing when circumstances permit. For example, we were very pleased that Angela Owusu who learnt as a teenager 25 years ago now has an eleven year old daughter. She came to our reunion and is keen to learn, so we have put both of them in touch with their local tower.

Over the last 25 years we have not rung a Sunday band peal, although with our extended practice night band we have rung peals of Bob Major at Bermondsey and Walworth, a Peal of Grandsire Triples at Rotherhithe and a peal of Doubles at Bermondsey. We have also rung a considerable number of quarters from Bob Doubles up to Surprise Major. We were also pleased to hear at the weekend that Janet Ritterman one of our former ringers had rung her first peal (Yorkshire Major inside) at the first attempt and she was very grateful for the all help that we gave her earlier in her ringing career.

The reason for the restoration was that previous heavy ring of ten bells (tenor 28 cwt) installed in 1829 had become virtually unringable. The opportunity was taken to replace them with the current ring of eight (tenor 14 cwt), as a part of a major refurbishment of the church. Bermondsey has a strong local community, with a wide range of skills on tap, and many local parishioners literally mucked in and became involved in the project to help keep the cost down. Remarkably the balance of £65,000 needed to complete the project was raised within 12 months. Many of those who mucked in went on to learn to ring on their bells, and at one stage the majority of the PCC were ringers.

The challenges of maintaining a Sunday band over the last 25 years in a parish like Bermondsey are probably no different to these in many urban parishes up and down the country. The key to our success has been a strong commitment to recruiting new ringers and helping them progress up the ladder to ringing surprise, if they wish to progress that far. However, all members of the band are valued, even if they don’t become surprise ringers. We have also tried to strike a balance between the needs of our local band and those of our visitors, so that everyone puts something back. We have seen so many other bands collapse because they seem to lose touch with their local community and put less effort into recruiting and training new local ringers.

We are very grateful to the Surrey Association for their fellowship grant. Having restored so many rings of bells in Surrey, we are sure that their innovative new fund will ensure that those restored rings, like Bermondsey (and our neighbouring towers of Rotherhithe, Walworth and Camberwell) will have local bands to ring them well into the future. We are also grateful to the Association of Ringing Teachers for the support they have given us, not only through the £400 prize, but also their advice and encouragement over the recent years. Having taught quite a few people to ring we thought we knew it all, but we have learnt a lot and are probably now better teachers as a result.

The new video facilities and the work we are also doing to upgrade our simulator system will help us connect better with our congregation, raise local awareness and presence of the ringers, continue to recruit new ringers and to better train the next generation of ringers for the local band. 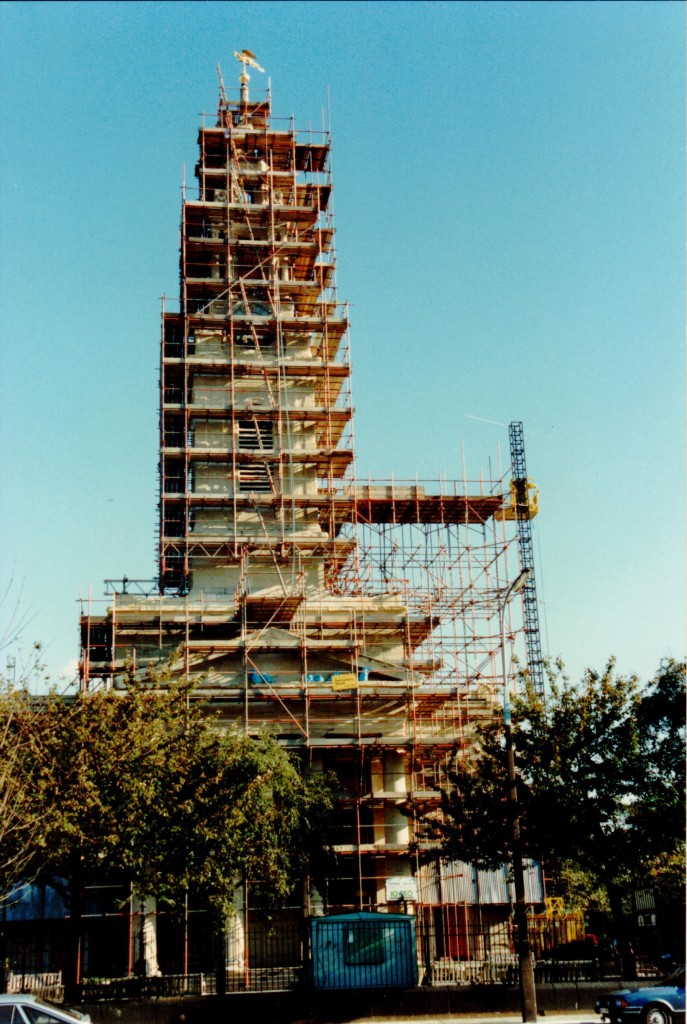 The tower in scaffold. The hoist was used to remove the old bells and frame and install the new frame 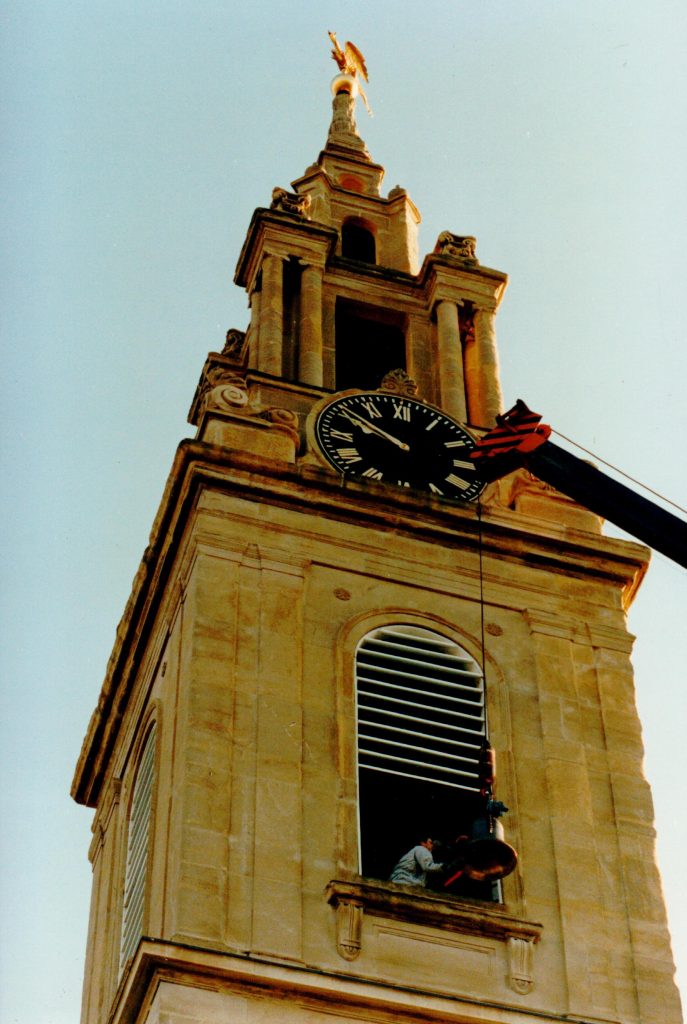 The last of the bells is craned into the tower