Stepney has held a weekly tied bell practice in the hour before main practice since early 2012. It is modelled on the Foster Lane approach, where some of us are also band members. Its benefits there are obvious and so it seemed a good practice to adopt.

It is an excellent enhancement to basic training: one-on-one handling practice, uninterrupted time to refine technique for those ‘safe on the end of a rope’ and, at Stepney, a simulator is added  providing for self-directed learners at the stage of developing listening skills and learning methods. All levels happily co-exist before the main practice and it can be quite a busy hour.

The benefit to those who take advantage of it is clear and we are pleased to celebrate the achievements of band members and to have their feedback.

Jennifer, who first expressed an interest in learning to ring in 2011, was taught using facilities at Stepney and Bermondsey. With restricted stamina preventing long stretches of ringing, we are looking forward soon to an eighth peal especially for Jennifer. In the meantime, Jennifer rings for weddings, practices, most Sunday services and joins us on outings when she can. Her repetoire includes Bob Doubles and Grandsire Doubles, treble bobbing minor and plain hunting on higher numbers. Jennifer says:

“I really appreciate the flexible ringing training at Stepney.  I always feel really welcome and very supported in progressing within the limits of my health.  A big ‘thank you’ to all the trainers at Stepney, and particularly to Elizabeth, who got me started and continues to be hugely encouraging, patient and always ready with just the right advice.”

Éva, a member of Stepney’s congregation who discovered ringing in August 2013 and who has also joined the Foster Lane and St Giles-in-the-Fields bands, is a keen ringing evangelist and an energetic and ambitious learner who has already rung 3 peals and 85 quarter peals. She rang her first quarter peal at Stepney (as cover) only 5 months after her first lesson and her first peal at Foster Lane – Doubles & Minor on an inside bell –  less than 2 years later. Éva doesn’t stop at ringing bells: she is also maintaining them as an apprentice steeple keeper at two towers!

Alan too is a member of the congregation. He began at Stepney in October 2015, rang his first quarter as cover in May 2016, his first as treble 6 months after that and his first inside a month later. Alan devotes time to practice regularly with the simulator and has developed a very well-tuned ear. He has been getting to grips with methods first on the simulator and then, having experienced the rhythm, pace and music, refines ropesight amongst a band. Alan says:

“the tied bell practice at Stepney has been invaluable to me in my development as a ringer. Initially, it gave me the chance to learn about, and to practise, bell handling in a more intensive way than would have been possible if I was only getting a few minutes ringing time during the main practice.

“Once I had learnt the basics of handling, the tied bell practice then allowed me to gain experience of ringing rounds, call changes and methods using the simulator. This, combined with the ever-helpful guidance given to me by the more experienced ringers who assist with the practice, meant I could develop my listening skills and learn methods; at the same time as refining my handling skills. My ringing is definitely still a work in progress, but it is only going to get better through practice- something which has been a joy to do in the patient, supportive and friendly atmosphere at Stepney.”

Daniel, who joined as a learner in the summer of 2015, has an irregular schedule and so practises on free evenings where he can, whether at Stepney, or Middlesex towers Pimlico and Garlickhythe. At this last tower, on 1 December 2016, he rang his first quarter, conducted by Dickon Love, and supported in part by members of Docklands towers. Daniel says:

“tied-bell practice is of unsurpassed importance to me as a learner. At first, it constituted most of my rope time, and offered an occasion for private instruction, when I could communicate with my teacher, and attempt things without worrying about mistakes. By speeding my progress, it has sustained my interest in ringing, which did waver, especially before I had learnt to properly handle a bell. I observe others at practice, but do not find it especially useful, for I learn best by doing. Perhaps we all do. At any rate, I find it easiest to fix something in my mind by doing it many times in succession. Nevertheless, ringing has made me sharpen my observational skills. Tied-bell practice remains indispensable to my progress : it allows me to direct some of my learning and to refine basic skills. Even the virtuoso begins his daily practice with scales ; surely a humble learner must do the same.”

Thomas came to London from Switzerland as part of a 6-month arts residency at the beginning of 2016. With an interest in English Change Ringing he came first to Stepney and then doubled his training opportunities by joining the Foster Lane band as well. He rang his first quarter peal as treble at Foster Lane the day before he returned to Switzerland and rang a second on a recent visit. Thomas says:

“change ringing gave me a fantastic and pleasing opportunity to join some interesting and nice people from London, in an atmosphere (church towers and bells), practising something very very English (what I can’t use in Switzerland – that’s a good reason to return from time to time to London). I took some beautiful experiences and memories with me – and friendships, too.”

Anna, who joined in September 2016, has had to take a break from ringing in 2017. But in her first four months of training with Gill, Callum and Geoff Anna proved herself a keen learner and made tangible progress each week. As 2016 drew to a close, Anna was ringing both strokes confidently. She attended the tied bell and main practices where she was ringing rounds and call changes two or three times each practice. Anna says:

“for many years I have stopped my bicycle by the side of the road to listen to Church Bells and now I am on my way to learning to ring myself! I was greeted with friendliness and treasure and appreciate greatly the patients afforded to me by the Stepney Band.”

Representing the diverse range of experience amongst the Stepney band, these members have now been joined by three more learners since January 2017 who are keen and making excellent progress.

There are many training models in London and around the UK –  this one has been working well for us since 2012.  Confidence is built along with learner / mentor relationships. Equally important is the low-pressured buffer it provides of warm-up and consolidation before the main practice. We hope to allay the common laments heard at times from learners everywhere – struggling with a new skill in front of the whole band, feeling slow to pick up skills, or of taking up practice time.

Not everyone who expresses an interest in ringing ultimately decides to make the commitment it requires. We feel it’s important to welcome everyone and provide capable teaching in a supportive environment. Having offered that, we trust that the friendly atmosphere encourages those who come up the tower stairs to become ringers and, we hope, band members.

We were very pleased when BBC Radio 4 approached Stepney about commissioning new recordings for the marvellously esoteric slot that still opens and closes their Sunday schedule.

A new recording of Stepney, featuring an all-current Stepney band, will be broadcast 05:43 Sunday 17 September and again at 0:45 Monday 18 September 2017. 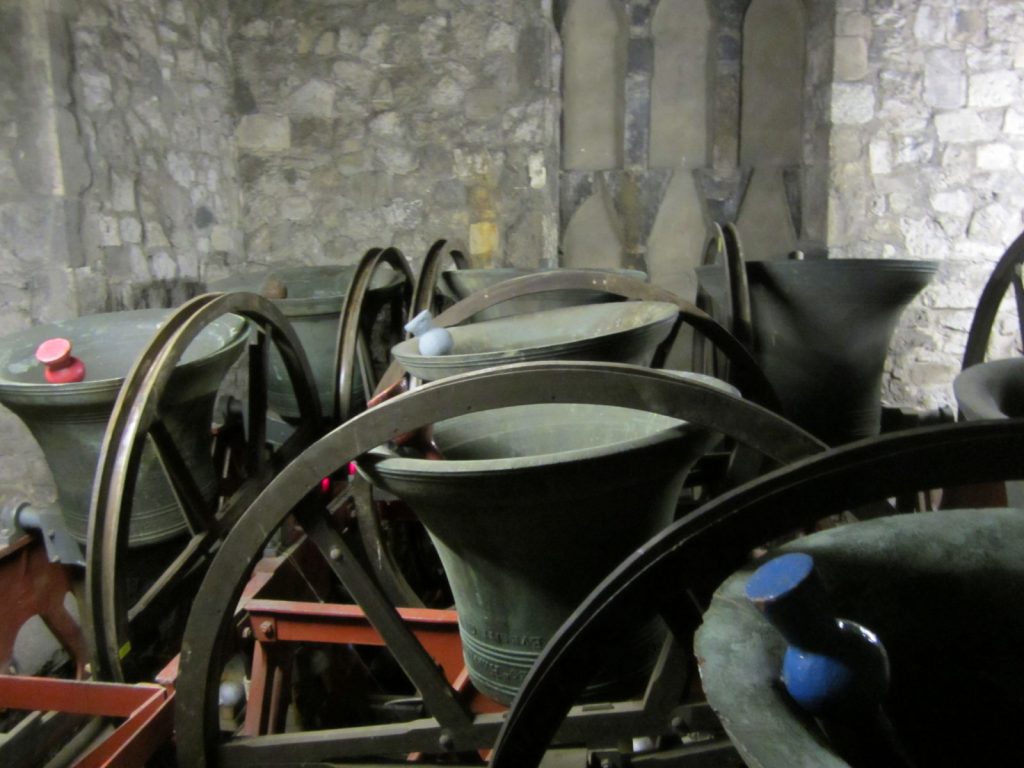 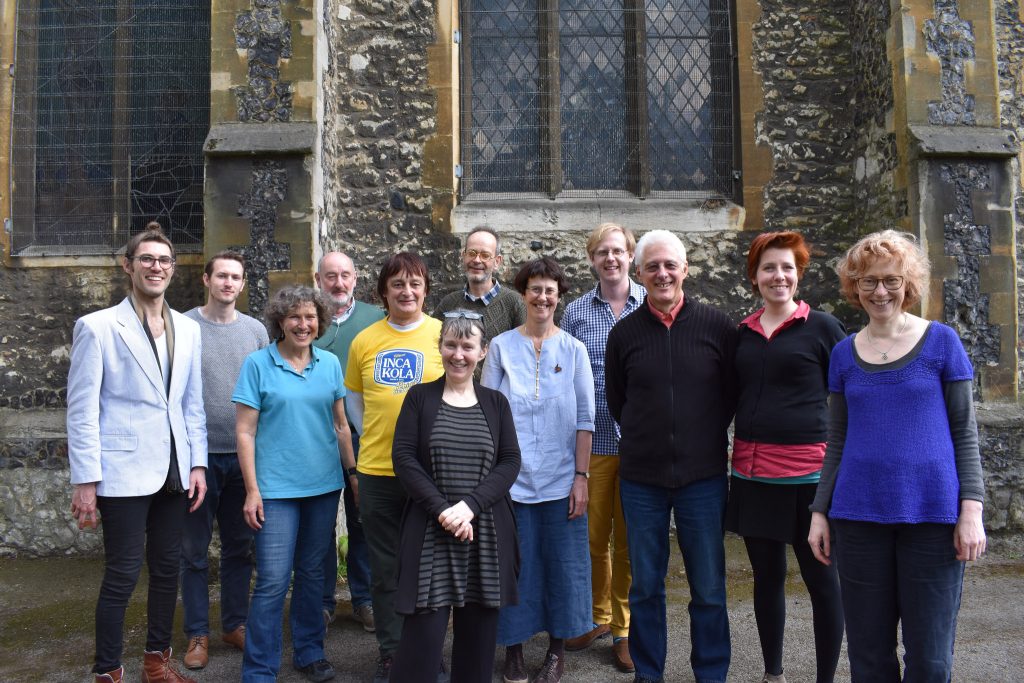 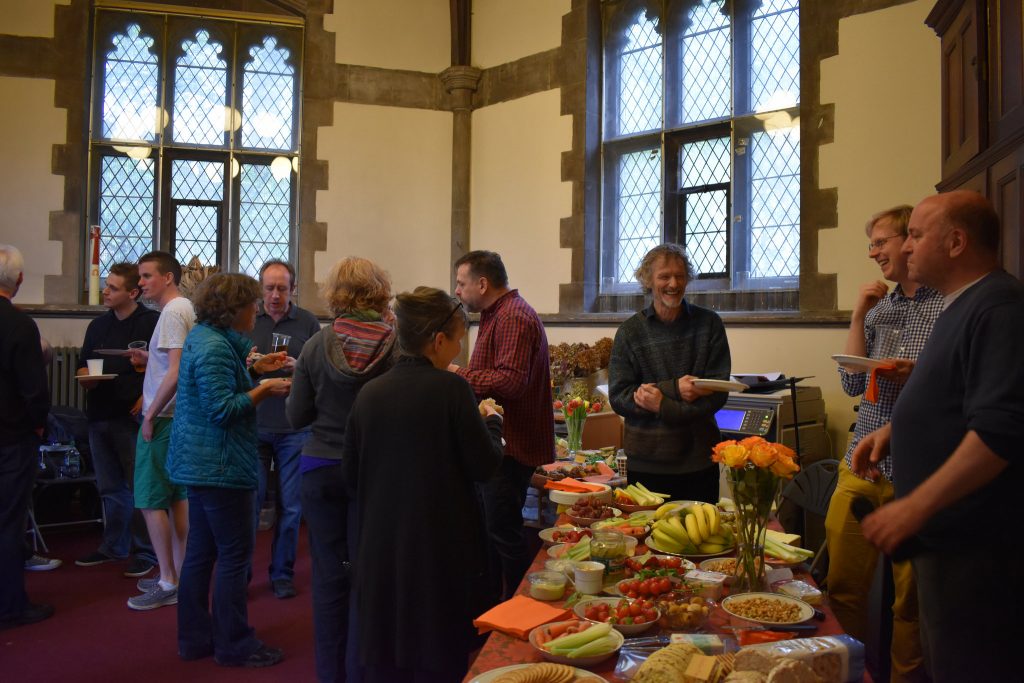 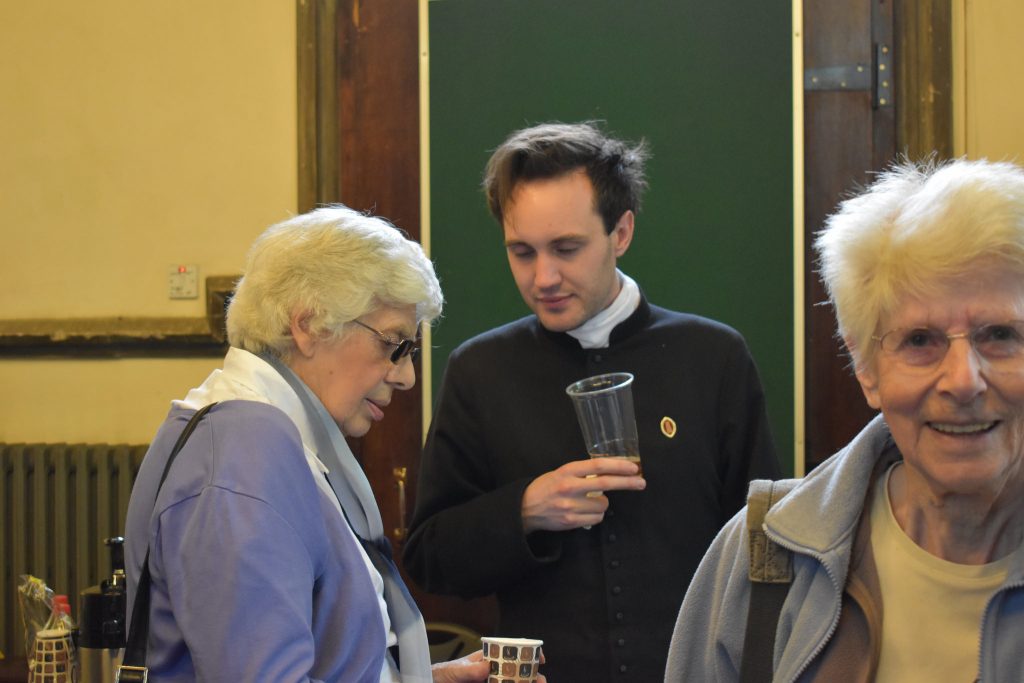 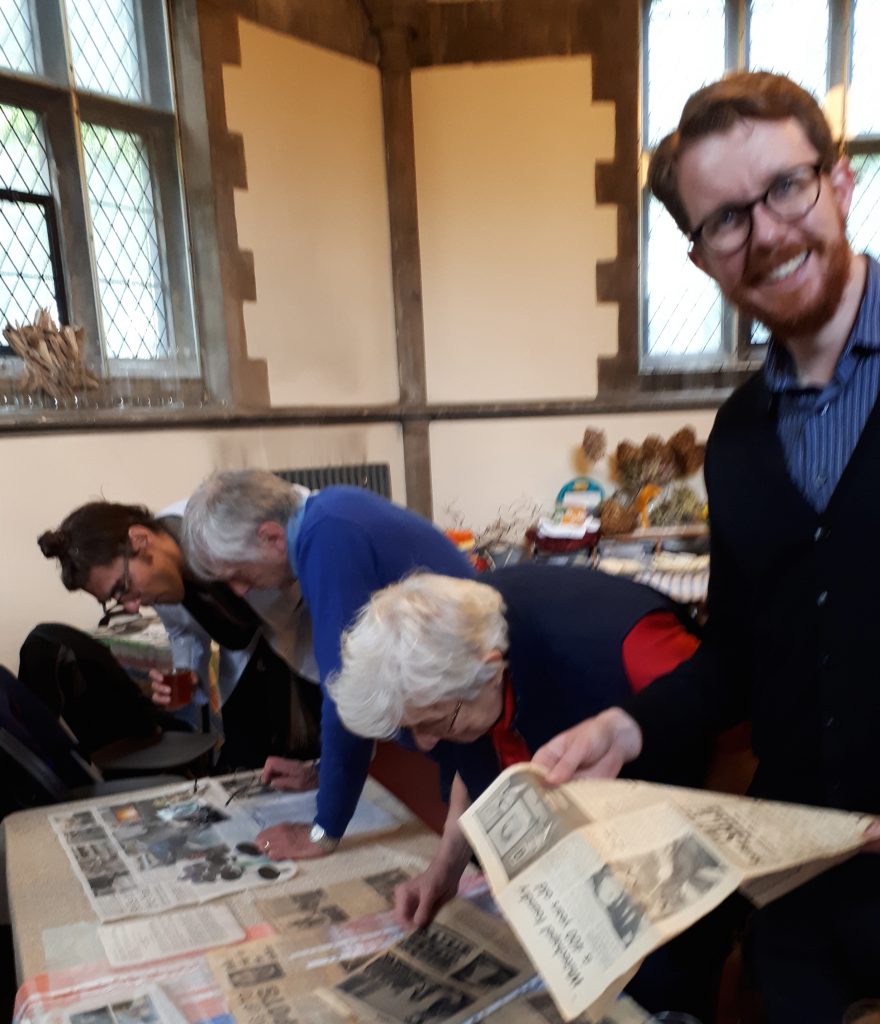 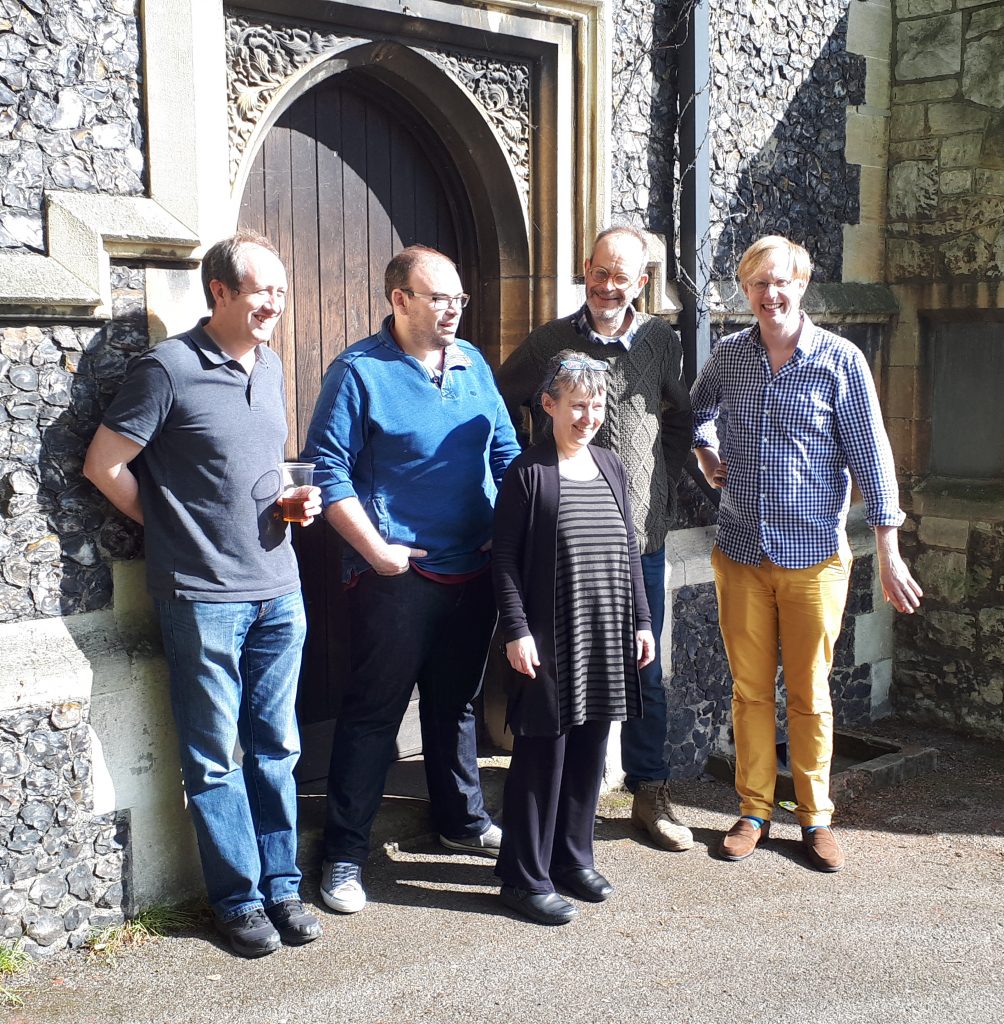 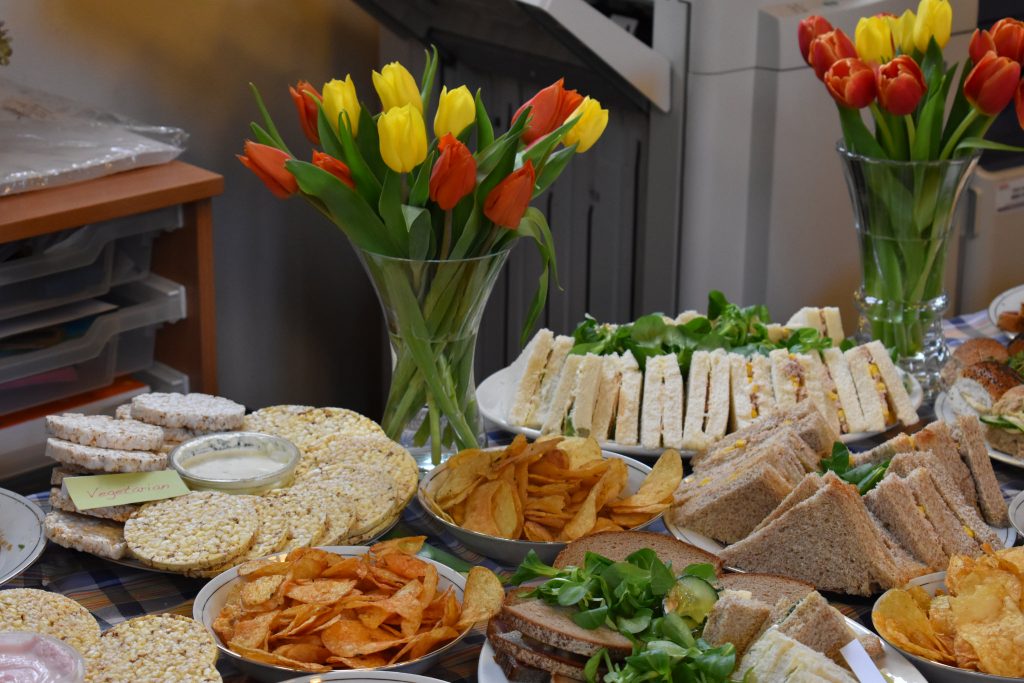 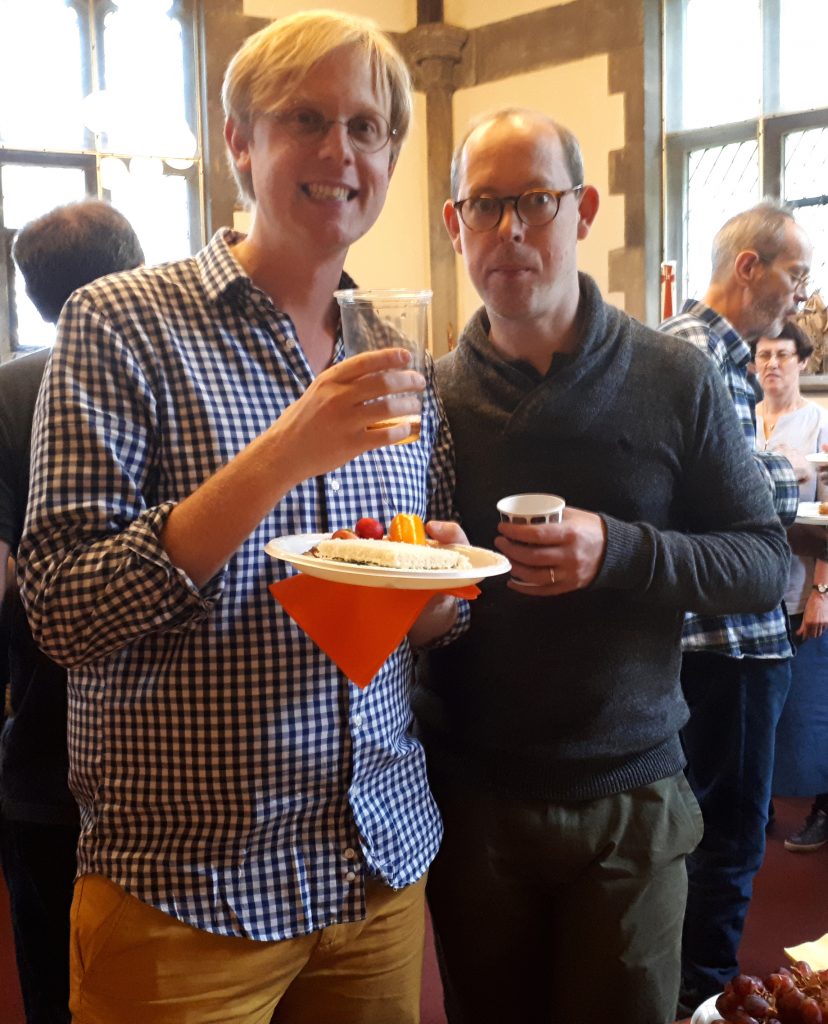 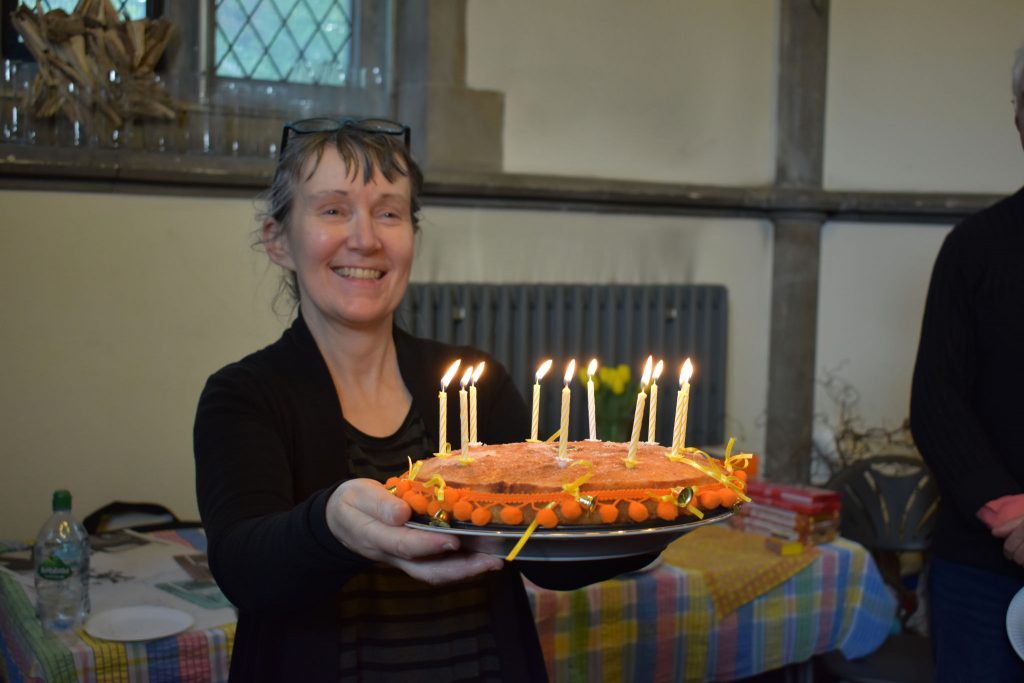 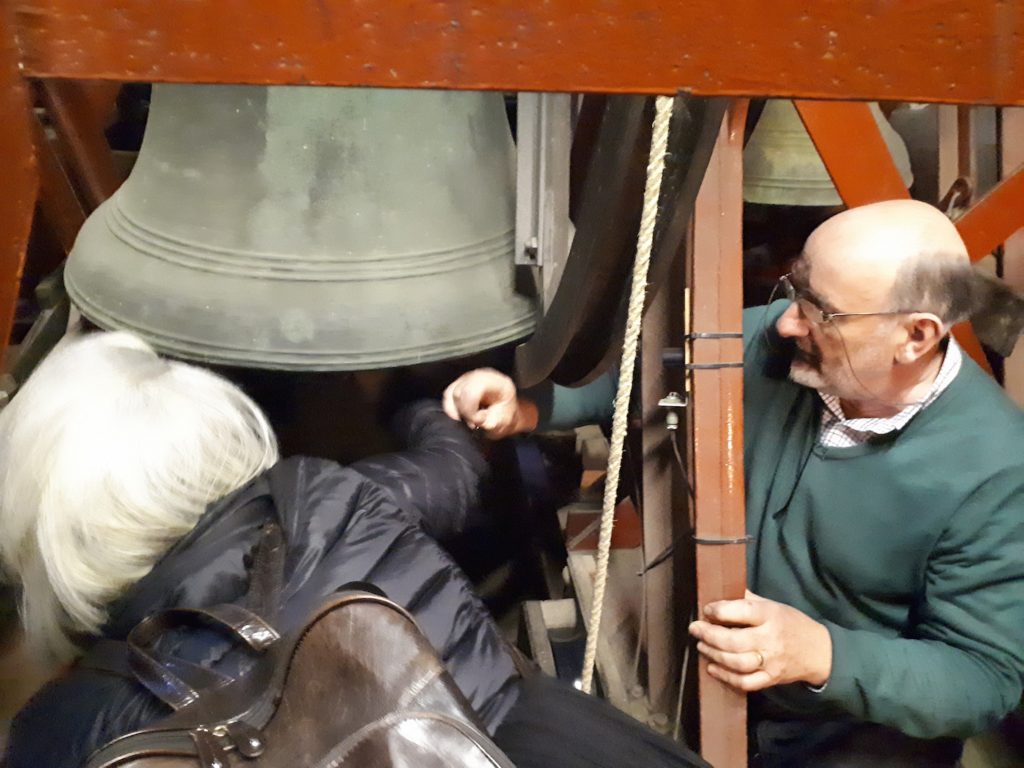 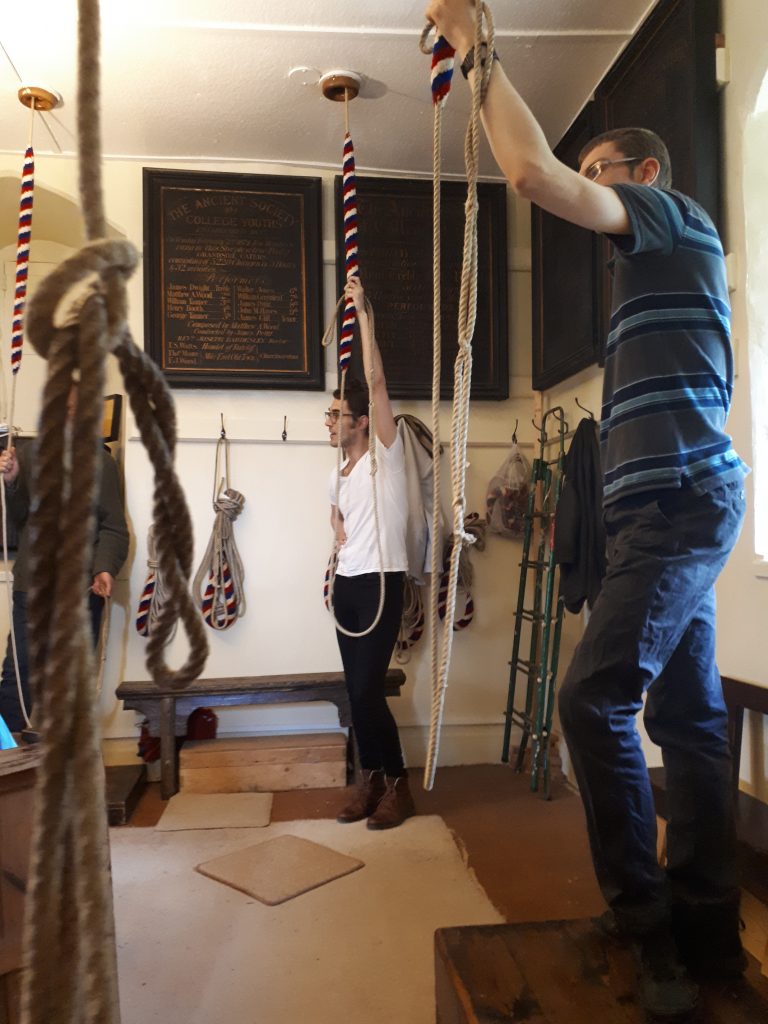 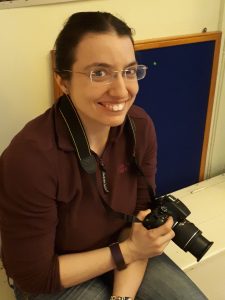 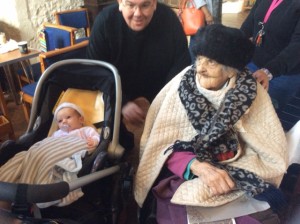 Stepney bells rang out again after the service on Sunday 12 April in special celebration of the 100th birthday of Constance. The most senior member of the congregation, the birthday girl is pictured here with Father Chris and Scarlett, on that day aged three weeks – the congregation’s youngest member.

Following long touches of some very lovely called changes, Churchwarden Angela came bounding upstairs bearing ebulient thanks from Constance and her two daughters. We were then invited to partake in birthday cake saved especially for the ringers, which added greatly to our enjoyment of ringing for such a special occasion.

Special thanks go to ringing colleagues Tom,  Juliet, Alastair and Tony who came from St Vedast Foster Lane, joining Elizabeth, Eva, Jennifer, Julian, Kevin and Mark and enabling us to ring all 10 of Stepney’s fine bells. Nothing less would have been appropriate on such an occasion: needless to say it’s not every day a member of our congregation celebrates 100 years of life. It was a very great honour to ring and contribute to the festivities. Many Happy Returns, Connie!

We’re mentioned in a blog post from our friend Scott Brennan. Though missing us, he is still ringing!

Cheers, Scott. We miss you too.