The training committee of DRC would like your input into the training programme for the coming year. Please could members contribute by completing this survey.

The training committee is meeting next on Sunday 17th January, and so we would appreciate your responses by then.

On Saturday 17th May, Jonathan Slack led a workshop for five ringers to learn the theory and the practice of ringing a new method by learning the rules rather than the blue line.  With coffee in hand, we learned the theory of Double Court Bob Minor – that you don’t dodge with the treble, that you treble bob at front and back, but if the treble turns you from the front or back, don’t dodge – plain hunt out and do places far (4ths) and near (3rds).  Simple!  Then we tried it.  Most of us are are devotees of the blue line, so to dispense with the graphic image and ringing by watching where the treble is proved quite a hard lesson, but a very worthwhile one.  With Jonathan plus five people ringing the method for the first time, it took an hour of attempts before we cracked it, but cracked it we did, and, flushed with success, rang Double Oxford Bob Minor at the first time of asking!

The next DRC training day is Saturday 14th June when simulator sessions will be on offer again.

Docklands ringers held their first quarter peal day on Monday 5th May. The day started at 10am with a quarter of bob triples at St Mary Magdalene, Woolwich, conducted by Jonathan Slack. As several of the band are teachers, this quarter was dedicated to Ann Maguire, the teacher stabbed to death by a pupil in Yorkshire this week. The next was a quarter of bob doubles at 12 noon at St Alfege Greenwich, conducted by Graham Long. A walk through Greenwich foot tunnel took the ringers to Christ Church, Isle of Dogs, where at 2pm, Gillian Harris called a quarter of grandsire doubles. Then on the St Anne’s Limehouse for 4pm for bob triples, conducted by Andrew Clark, which sadly was the only quarter not scored. The day was rounded off with a welcome pint at The Queen’s Head, York Square.

Very many thanks to the sixteen ringers who took part in the day:

The tradition of the belfie – a selfie taken in the tower of the successful ringers – was only continued at the two towers where Joe Tilley rang, being the instigator of this tradition. The rest of us forgot, but here is one Gill took of the band taking a belfie at Greenwich 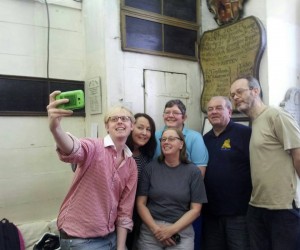 The DRC currently has two regular quarter peal slots a month to further the training of its members.  These are usually both at Stepney, one at 4.30pm on the second Sunday of the month and one at 6.20pm on the third Thursday of the month.

The idea is for individuals to take a turn at organising them in order to spread the load, to ensure you get to ring what you want to ring, and to give people experience of organising quarters if they haven’t already.  It also enables you to take control of your own development as a ringer.  Another reason is that we have limited capacity within the DRC to ring everything everyone wants, but if different people organise them and they call on people they ring with at other towers, our capacity is extended.

To organise a quarter, one first needs to get a tower and a time.  These two elements are done for you, so you then need to decide what you want to ring, and consider who to ask to conduct it – Jonathan, Andrew, Chris and Roger are usual suspects, but there are others within the DRC and you might know other conductors.

For those new to organising, it is advisable to consult with your conductor as to the composition of your band.

I keep a record of who is organising each one, so that we do not end up with a clash, so if you want to organise something, let me know and I will tell you the next available date.

Of course, this does not preclude anybody organising a quarter at another tower at another time and if lots of people are enthused, we can consider setting up another regular time at another tower.  Information about contact people for the other DRC towers are elsewhere on this website.

I look forward to a deluge of emails saying you want to organise something!